Athletes from 27 nations will be on the start line for the eighth edition of the Carrera de la Mujer in Bogota on Sunday (28), with the multinational women-only field for the IAAF Gold Label Road Race headed by the 2013 IAAF World Championships 10,000m bronze medallist Belaynesh Oljira.

Oljira hasn’t quite shown the same form over the shorter distances this year, although she finished third in the African Championships 10,000m last month, as the 24-year-old Ethiopian has set her sights on doing well at the marathon, running a personal best of 2:24:21 in the Boston Marathon earlier this year.

She has a best of 31:07 over 10km on the roads, which will be the elite women’s distance in Bogota this year, returning to the course length contested in the first two years of the event before it moved up to 12km.

However, with Bogota being at 2625m altitude, higher than either Addis Ababa and Nairobi, fast times are unlikely to be to the fore of any elite runner’s priorities on Sunday.

Oljira also has unfinished business in the Colombian capital.

Last year, she was touted as the favourite after her podium finish in Moscow only to be a late withdrawal after being diagnosed with typhoid fever just prior to her departure for Bogota.

Kenya’s former world youth and junior 3000m champion Veronicah Nyaruai will also be on the start line in Bogota, returning to the race she won in 2012.

However, as Nyaruai is having her first international race of the year, perhaps a bigger threat to Oljira on current form is Nyaruai’s well-known compatriot Lucy Kabuu.

This year, Kabuu has finished third at the Tokyo Marathon in February in 2:24.16, the following month finished fourth at the IAAF World Half Marathon Championships and then had two good wins on the roads over shorter distances but against high quality fields in India and the USA in May.

South America will be well represented by Peru’s Judith Toribio, the three-time winner of the Lima Half Marathon who caused a big surprise when she finished fourth in Bogota last year.

Local interest will be sustained by Yolanda Fernandez, who won the first three editions of the race, and Colombian 3000m steeplechase record holder Angela Figueroa, who are expected to duel for the honour of being the first Colombian runner to cross the line.

An estimated 18,000 women are expected to participate in the three main races on the day, over various distances, which will be staged in Bogota’s Parque Metropolitano Simón Bolívar.

The event can also boast of being one of only two women-only events with IAAF Gold Label Road Race status, the other being the Nagoya Women’s Marathon in Japan.

BACK
Pages related to this articleAthletes
Rosaria Console 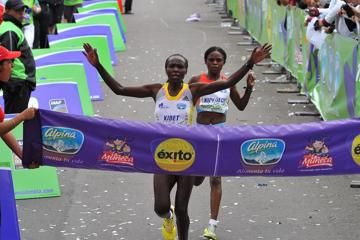