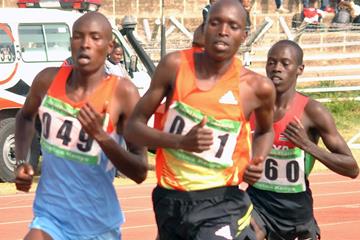 The first gold medals of the 2013 IAAF World Youth Championships in Donetsk, Ukraine, will be decided in the boys’ Shot on the evening of 10 July, while the morning session of day one will be buzzing with action both on the track and on the in-field.

Here’s a look at what to look forward to across the five days of action in the boys’ events.

SPRINTS – double medals the target for O’Hara and Mena

Despite the dominance of Jamaican sprinters at the senior level, an athlete from the Caribbean nation is yet to win the 100m-200m sprint double at the IAAF World Youth Championships. But Michael O’Hara could put an end to that.

He is the fastest entrant in the 100m and is ranked second in the 200m. But the athlete at the top of the 200m rankings, Cuba’s Reynier Mena, is also a talented 100m runner and could come away from Donetsk with two medals – perhaps even gold.

O’Hara’s team-mate Devaughn Baker is the top-ranked sprinter over one lap of the track, but USA’s Ryan Clark – who is also entered in the 200m – will be keen to keep the 400m title on US soil, following Arman Hall’s victory two years ago.

It’s not unusual to see a Cuban and a Chinese athlete do battle in the 110m Hurdles, and Donetsk will be no different. Of the athletes competing in Donetsk, Cuba’s Roger Iribaine owns four of the five fastest times this season, his best being 13.33. But China’s Lu Yang recorded his 13.45 PB into a -1.7m/s headwind so could be set to run faster.

USA’s Marlon Humphrey is entered in both Hurdles events, but his best chance of gold will be in the 400m Hurdles, where his team-mate Kenneth Selmon could also make it on to the podium.

As ever, USA will be favoured to win the Medley Relay. Given Jamaica’s current crop of talent across all sprint events, they could be in the mix for gold.

In Lille two years ago, Kenyan boys took two medals in each of the four distance events. They won gold in three of them and came close to making it a perfect sweep, missing out by just 0.04 in the 1500m.

In fact, at each of the past three editions of the World Youth Championships, Kenya have won gold in three out of the four distance events. They will be desperate to go one better this year, but Eritrean 800m runner Tsegay Tesfamariam could get in the way.

The 17-year-old was beaten at the African Youth Championships this year, but the winner on that occasion, Kenya’s Robert Biwott, will be focusing on the 1500m in Donetsk, where he’s the favourite.

Kenya will be represented in the 800m by Patrick Rono, third at the African Youth Championships, while the European challenge will come from Britain’s Kyle Langford and Russia’s Konstantin Tolokonnikov.

Aside from Biwott, Kenyan team-mate Titus Kibiego is the only other athlete under 3:40 this year in the 1500m.

It’s a similar situation in both the 2000m Steeplechase and the 3000m, where Kenya boast the fastest entrants, followed by Ethiopia. There has been just one occasion, 2007, when Kenya failed to win the World youth steeplechase title, so it is down to Nicholas Bett and Justus Lagat to defend their country’s honour.

Kenya’s stranglehold of the 3000m is only slightly less impressive, having won all but two World youth titles, but Vedic Cheruiyot and Alexander Mutiso are heavily favoured to maintain the tradition in Donetsk.

In the longest event of the programme, the 10,000m Race Walk, if Paolo Yurivilca lives up to expectation he could claim the first ever medal for Peru at the World Youth Championships. He currently leads the rankings in the event by 22 seconds from Greece’s Zaharias Tsamoudakis. However, the Chinese pair of Yao Biao and Dai Jianxing cannot be counted out after posting fast times on the roads for the 10km distance.

Jamaica is yet to win a gold medal in a boys’ jumping event at the World Youth Championships, but high jumper Christoffe Bryan might be the athlete to end that drought. He has the best mark this year of all the high jumpers in Donetsk, but Korea’s Sang-Hyuk Woo is close behind, 2.19m to 2.18m.

The US team often take away a bagful of gold medals from the World Youth Championships, but the boys’ Pole Vault is one event they are yet to conquer. Devin King has this year vaulted 5.26m – a height that would have been good enough to win any of the past editions of the World Youths – but Britain’s Harry Coppell is just six centimetres behind on season’s bests.

The Long Jump is set to be a battle between Russia and China. Anatoliy Ryapolov has broken the Russian youth record this year with 7.90m to lead the entrants, followed by team-mate Maxim Yunyakin (7.63m). But China’s Zhong Peifeng and Fang Yaoqing are within touching distance of Yunyakin.

Fang is also entered in the Triple Jump, where he is also among the medal contenders, but the favourite is Cuba’s Lazaro Martinez, who this year went to sixth on the world youth all-time list with 16.53m.

THROWS – Denny at the double

No male thrower is yet to win two gold medals at the IAAF World Youth Championships, but Australia’s Matthew Denny could be the first to achieve that in Donetsk this week. He leads the Discus rankings with 67.28m and is a close second in the Hammer with 81.44m.

Only Argentina’s Joaquin Gomez has thrown farther in that event (81.88m) and there have been just two boys break 78 metres this year.

Poland’s Konrad Bukowiecki went to fifth on the world youth all-time list earlier this year with his 22.33m best in the Shot Put, making him the favourite to take the title in Donetsk. But Germany’s Patrick Muller, who has a best of 21.92m, is capable of challenging.

The Javelin should be a close contest between Hungary’s Norbert Rivasz-Toth, Finland’s Oliver Helander and Sweden’s Simon Litzell.

Perhaps one of the biggest favourites of the championships, Cuba’s Santiago Ford is more than 300 points clear of his rivals in the Octathlon this year, putting him in line to follow in the footsteps of 2005 winner Yordani Garcia, also from Cuba.

But with eight events comes the numerous possibilities for catastrophes, which would throw the competition wide open. Four other athletes have broken 6000 points this year: USA’s John Lint and Gabriel Moore, and Russia’s Feliks Shestopalov and Andrey Fomichev.