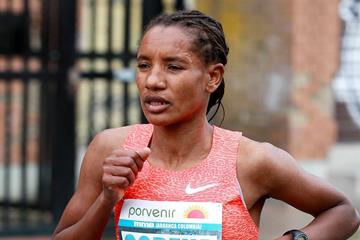 All eyes will be on Kenya’s marathon world record holder Dennis Kimetto and defending women’s champion Amane Gobena at the Bogota Half Marathon, an IAAF Gold Label Road Race, but for contrasting reasons on Sunday (31).

Kimetto – who became the first man to run under 2:03:00 for the classic distance when he ran was is still the world record of 2:02:57 at the 2014 Berlin Marathon – will be looking to resurrect his reputation in the Colombian capital after a torrid 12 months since failing to finish the marathon at the IAAF World Championships Beijing 2015.

Having not been selected for the Rio 2016 Olympic Games, he will have a point to prove ahead barely two weeks before the Olympic athletics programme gets underway.

Taking into consideration his modest recent form, Kimetto is far from the favourite in Bogota and, instead, that role is occupied by Ethiopia’s Sisay Lemma.

Lemma clocked a personal best of 2:05:16 when finishing fourth at the Dubai Marathon and although his next outing, finishing seventh in the London Marathon in 2:10:45, was not quite as auspicious, he has not raced since and could have put in a good period of very solid training in preparation for this race.

Kenya’s Marius Kipserem has also run impressively over the marathon distance this year, winning in Rotterdam in a personal best of 2:06:11 and although his half marathon best is a relatively modest 1:02:17, that was run at altitude in Nairobi and if he is in that sort of form, he could also challenge the course record of 1:02:20, set by his compatriot Geoffrey Mutai in 2011 shortly after his famous win in the Boston Marathon in 2:03:02.

Tadese Tola, the 2013 world championships marathon bronze medallist, was second in Bogota 12 months ago and returns to the race but he has not run internationally since then and so his form is far from certain.

Another man familiar with the race is Kenya’s Issac Macharia, who won three consecutive editions from 2007 to 2009, but has not been in the sort of form that took him to the hat-trick of victories for several years and his last international outing was when he failed to finished the Fukuoka Marathon last December.

Local hopes look to rest on Miguel Amador, who set a 10,000m best of 28:33.58 when winning at the Mt SAC Relays in California in April and, given his familiarity with the terrain, he might have a chance of making the podium.

Last year’s men’s champion Stanley Biwott is not returning to defend his title in Bogota as he is part of the Kenyan team going to the Olympics.

Gobena was, perhaps, unlucky not to be selected to be part of the Ethiopian trio contesting the Rio women’s marathon after her outstanding personal best of 2:21:51 when finishing second in the Tokyo Marathon in February and so will also be looking to prove a point on Sunday.

Having run 1:13:44 to win 12 months ago in the thin air of Bogota – the Colombian capital lies at around 2600 metres – she can draw upon that experience and use her knowledge of the course and conditions to go faster.

However, the course record of 1:10:29 set by Kenya’s Susan Chepkemei in 2003 is a very good mark indeed and it will require a Herculean effort by Gobena, or anyone else, to get near it.

Gobena’s main rival this year, at least on paper, looks to be another Kenyan, Purity Rionoripo.

The 2009 world U18 champion over 3000m is now a confirmed road runner and this year has already set personal bests over 15km and the marathon, the latter being 2:25:00 when finishing second in the Prague Marathon in May.

Kenya’s Veronica Nyaruai, another former world U18 3000m champion of a slightly earlier vintage, in this case 2005, is also in the field while Eritra’s Nazret Weldu, USA’s Janet Cherobon-Bawcom and Ethiopia’s Etaferahu Temesgen could also challenge for a place on the podium.