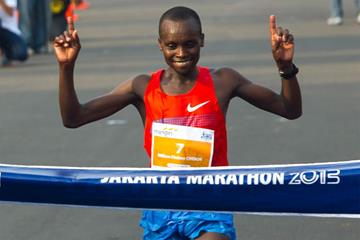 He signed up last but arrived first, and first could well be where Tomoyuki Morita finishes on Sunday (6) in the Brighton Marathon, an IAAF Bronze Label Road Race.

Morita, 29, has already made a little bit of history by being the first Japanese athlete to come to the Brighton race and with a personal best of 2:09:12 he might well be the man to set yet another course record.

Based in Tokyo and coached by national record-holder Toshinari Takaoka, Morita set his best time in Otsu two years ago and it is in that same year that he also established his half marathon PB of 1:01:55.

Morita will need all of his speed to challenge the defending champion, Dominic Kangor of Kenya, who swept all before him last year to establish a course record of 2:10:46. Since then, Kangor has finished third in Melbourne and won at altitude in Kampala last November.

In its four years of existence the race has enjoyed course records on every single occasion in both men’s and women’s races.

This year the field will be helped by a revision to the course which has taken out a hill in mile 11 and added an extra loop in the early part of the race to compensate. So the organisers are hoping this will be to the liking of the elites as well as the massed ranks that follow.

The start is also different for the elites since they line up on the London Road and have a straight run into the city centre while the mass race begins with a loop of Steve Ovett’s old stomping ground of Preston Park before the routes merge.

By far the fastest man in the race and trailing a fine pedigree is William Chebor. With a best of 2:08:21 from the 2011 Turin Marathon where he finished runner-up, he is the only entrant to have run faster than 2:09 and comes off a win in Jakarta last year to add to his victory in the Gold Coast in 2009. He also boasts a string of second-place finishes from San Diego, Seoul and Gunsan.

Altogether, the top four men have all run faster than the course record in the past. Raymond Kandie of Kenya and Belete Mekonen of Ethiopia are third and fourth-fastest in the line-up. Kandie has run 10 marathons in his career and was second in Venice last year while Mekonen was third in Carpi three years ago.

The rest of the challengers are likely to come from Kenya’s Wilfred Murgor (2:11:41 PB) who was fifth here last year, Kidane Abdi of Ethiopia who clocked 2:12:57 from the Tiberias Marathon in 2012 and the USA’s Boulder-based Pat Rizzo, the first US elite man to run the Brighton Marathon and whose personal best of 2:13:42 stems from Houston two years ago.

There are two intriguing debuts from Kenyans Robert Langat and Andrew Lesuuda. Langat won the Krems and Klagenfurt half marathons in 2012 while Lesuuda has won Stroud, Reading and Cardiff half marathons and added a second place in Madrid last year over the same distance.

On the women’s side Hellen Mugo is the fastest woman ever to appear in Brighton, her 2:27:16 coming in Carpi 2010 where she established a lifetime best by more than 10 minutes.

She clearly does not mind solo running. In 2010 she won the Belgrade Marathon by 12 minutes and in 2012 she crossed the line first in Kosice, beating the course record by 51 seconds.

“I think I can run 2:25 with the help of pacemakers,” she said. Brighton has pacemakers lined up to see if she can make that claim reality.

The race is welcoming its first representative from South Africa, Tanith Maxwell, who has the specific aim of returning to these shores later in the summer. Her goal is a qualifying time for the Commonwealth Games in Glasgow. That time stands at 2:35 and given that the 37-year-old has a best of 2:32:33 to her name, she has everything to go for.

The remaining challengers for the title are Kenyans Alice Cherotich Serser who won Toulouse 2011 and Purity Kimetto who was second in Macau last year. Ethiopia’s Selam Abere made her debut over the distance in Marrakech in January while the main British challenge comes from Kendal’s Rebecca Robinson who set her best time of 2:37:14 in London 2010.

The former Brighton Marathon record-holder, Alyson Dixon, competes in a new event for the Brighton organisers, the inaugural BM10k, on the same morning as the marathon where she comes up against the fastest woman in the UK this year over that distance, Louise Damen.

Dixon comes fresh from a lifetime best at the IAAF World Half Marathon Championships in Copenhagen and is up for the fight. With only five seconds separating the two, it should be a scrap worth watching.

On the men’s side, London Olympian Nick McCormick has been in the form of his life recently, racking up a personal best of 28:56 for the distance when he triumphed at the Trafford 10km. McCormick might also have his eye on the £1000 time bonus for the winning male athlete breaking 29 minutes.

In total, 14,500 have registered for the marathon, 1300 for the 10km and on the day previous to the marathon, 2500 youngsters have put their names down for the ICONIQ Shlurp! Mini Mile to be held in Preston Park. Brighton is fast developing into a massive weekend festival of athletics.