Can Jeilan emulate Bekele on his Half Marathon debut in Lisbon?

Ibrahim Jeilan, Tariku Bekele and Imane Merga ahead of the 2013 Rock’n’Roll Vodafone Half Marathon of Portugal (© Andrew McClanahan - PhotoRun / organisers)

Ethiopia’s Ibrahim Jeilan, the 2011 IAAF World Championships 10,000m gold medallist and silver medallist over the same distance in Moscow, will attempt his first Half Marathon when he competes at the Rock’n’Roll Vodafone Half Marathon of Portugal in Lisbon on Sunday (6).

All eyes will be on Jeilan to see whether he can make as big an impact on his debut over the distance at the IAAF Gold Label Road Race as his illustrious compatriot Kenenisa Bekele did at the recent Bupa Great North Run, another ever in the top echelon of IAAF Road Race events.

Jeilan longest competitive outing so far has been over 15km and he hasn’t run over that distance since 2009 and, just like Bekele did when he duelled with Great Britain’s Mo Farah, Jeilan will also have to fend off some of the world’s top distance runners if he is to emerge triumphant in the Portuguese capital.

The classy Lisbon field includes three men who have already run under one hour in their careers.

One of that trio is Jeilan’s compatriot Imane Merga, the silver medallist at 2013 IAAF World Cross Country Championship.

The other two are Kenya’s 2010 IAAF World Half Marathon champion, Wilson Kiprop, who won the prestigious Rome-Ostia half Marathon in 59:15 earlier this year, and his team mate Gideon Ngatuny, although the latter has not run under 61 minutes since 2009.

In to the bargain, on the start line will be the strong Eritrean pair of 2013 IAAF World Cross Country Championship bronze medallist Teklemarian Medhin and Yared Asmeron, as well as Kenya's 2013 Paris Marathon winner Peter Some.

Everyone will have the course record of 1:00:20, set by Kenya’s Silas Sang in 2009, in their sights and be bidding to become the first runner to go runner the one hour benchmark on the course.

"I know this is a fast course, there are great pack of runners and I think that we can run in one hour or less," said Kiprop on Friday.

With African men winning the previous 13 editions of the race, it would be big surprise if a European was to come home first but Ricardo Ribas, Hermano Ferreira, and Luís Feiteira will be battling to be the top local runner across the line.

Around 17,000 runners are expected to take part in the Half Marathon on Sunday.

In addition, the Rock’n’Roll Lisbon Marathon EDP will be run in conjunction with the famous Half Marathon.

Ethiopia’s Dadi Yami, who can boast of a 2.05.41 personal best set al last year’s Dubai Marathon, and his compatriot Deriba Merga, the 2009 Boston Marathon winner, are the favourites.

Kenya’s Elijah Keitany, who has a personal best of 2.06.51, is also in the field. Ukraine’s  nine-time European corss country champion Sergey Lebid will also have his second try at the marathon after failing to finish in Warsaw earlier this year.

In the women’s field, the major names are Kenya’s Helena Kiprop and Agnes Kiplagat, who have personal bests of 2.23.37 and 2.23.54 respectively.

BACK
Pages related to this articleAthletes
Tariku Bekele 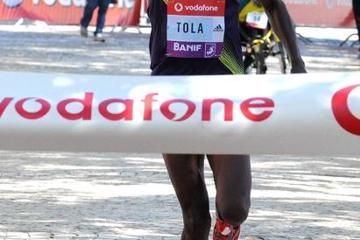 Tola and Keitany romp to Half Marathon victor... 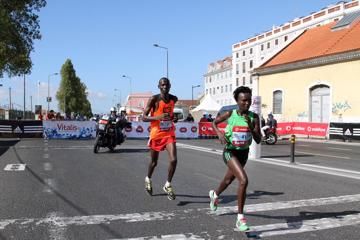 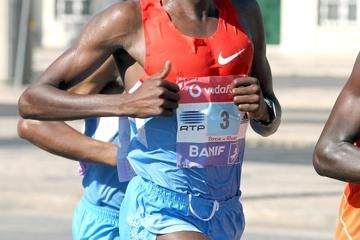