A strong Kenyan squad will start as the overwhelming favourite to take both the women’s individual and team titles at the 20th edition of the IAAF World Half Marathon Championships set for Saturday (6) in this Bulgarian Black Sea coast resort town.

Kenya has captured four of the last five team titles at these Championships, the last two propelled by the individual winners, Florence Kiplagat in 2010 and Mary Keitany the year before that. Those two won’t be at the start on Saturday morning but Kenya will field the five fastest entrants, with any of that handful fully capable of capturing the individual title as well.

At 1:07:17, Pasalia Chepkorir Kipkoech is the fourth fastest runner in the world this season, and the fastest of the field assembled in Kavarna. The 23-year-old produced that mark in Rio de Janeiro in August, one of four victories in as many outings this year on the Brazilian circuit. Underscoring her consistency was a 1:08:20 victory at Iguazú in July.

At 35 Lydia Cheromei is the oldest and most experienced with a knack of improving with age. A silver medallist at these Championships back in 2004, Cheromei has improved this year to 1:07:26 with her runner-up finish in Prague last March, and has also produced a 2:21:30 career best in the Marathon this year. Most recently she was fourth in the fast Lille Half Marathon where she clocked a solid 1:08:54.

Priscah Jepleting Cherono is another familiar name with plenty of high level experience. A silver medallist over the short course at the 2006 World Cross Country Championships, Jepleting took World bronze over 5000m in 2007 and was fourth over 10,000m in Daegu last year. This season, at 32, she improved her Half Marathon best to 1:08:35 with her third place finish in Lille last month.

But all the medal favourites aren’t from Kenya. The short list of realistic challengers includes Shalane Flanagan of the U.S., the bronze medallist in the 2008 Olympic 10,000m and at the 2011 World Cross Country Championships.

Flanagan has had a strong year on the roads, first winning the U.S. Olympic Trials Marathon in January and then the Lisbon Half Marathon in late March where she clocked 1:08:52. After the Kenyans, Flanagan is the field’s next fastest this season. The 31-year-old will be looking to regroup from a disappointing 10th place finish in the Olympic Marathon while she aims to become the first U.S. woman to finish on the podium at these Championships.

Starting as the fastest women in the field is Turkish star Elvan Abeylegesse who returns to international action after maternity leave. A former World record holder in the 5000m and a double Olympic silver medallist in 2008, the 30-year-old made an auspicious debut over the distance in Ras Al Khaimah in 2010 when clocking 1:07:07, which still ranks her as the ninth fastest woman ever.

Ethiopia, the team champion in 2004 and 2008, will be lead by Feyse Tadese who finished fourth in Nanning two years ago. The 23-year-old has a 1:09:15 to her credit this year after a fourth place finish in the Ras Al Khaimah Half Marathon and has also produced a solid 2:23:26 Marathon best with her victory at the Dong-A Marathon in Seoul back in March. Her career best, 1:08:44, was set last year in Rabat.

Japan, the team champion at the inaugural edition back in 1992 and the team bronze medallist five of the last six years, again arrives with team podium aspirations. Tomomi Tanaka is the fastest of the five this year with her 1:09:47 personal best from the Corporate Championships in Yamaguchi in March.

Others to watch include German Sabrina Mockenhaupt whose impressive 1:08:48 career best was set back in 2010. She hasn’t however contested any road races yet this year.

The weather forecast for race time calls for high humidity with temperatures between 15-16 C. (60-61 F.) under clear sunny skies. 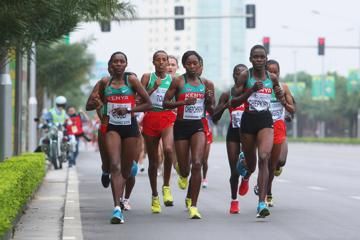