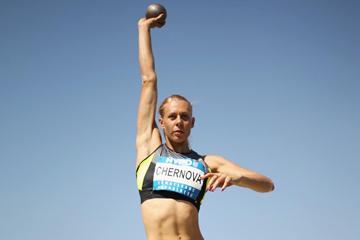 Tatyana Chernova in the Shot at the 2012 Hypo Meeting (Getty Images) © Copyright
23 MAY 2013 Preview Gotzis, Austria

World champion Tatyana Chernova will headline the Heptathlon at the Hypo Meeting – the second leg of the IAAF Combined Events Challenge – which will be traditionally held this weekend (25-26) in the picturesque Austrian village of Gotzis.

Chernova, the Olympic bronze medallist in Beijing 2008 and London 2012, will be looking to win her second Gotzis title five years after her first victory in 2008 when she scored 6618. Having finished second to Jessica Ennis for the past three years, this time the Russian will not need to worry about the Olympic champion as Ennis is currently on honeymoon after getting married last weekend.

At last year’s Hypo Meeting Chernova scored 6774, the second-best performance of her career after her 6880 PB set when she won the World title in Daegu, a performance that ranks her 10th on the world all-time list.

Chernova, daughter of 1980 Olympic 4x400m relay champion Lyudmila Chernova, has joined a select group of athletes who have won World titles at all levels – youth (Marrakesh 2005), junior (Bejing 2006) and senior (Daegu 2011). She has also twice won the IAAF Combined Events Challenge, in 2010 and 2011.

Her strongest opposition is likely to come from Antoinette Nana Djimou. The French athlete has won the last two European indoor titles as well as the 2012 European outdoor title, smashing her PB with 6544.

In Gothenburg indoors earlier this year, Djimou beat Yana Maksimava from Belarus and Anna Melnychenko from Ukraine, who both compete this weekend. Melnychenko finished second in Gotzis in 2009 with her PB of 6445.

The new generation of heptathletes will be represented by the Netherlands’ Dafne Schippers, who won the World junior title in 2010 before finishing 12th at the London Olympic Games with 6324 – just 36 points shy of the PB she set in Gotzis last year. A talented sprinter, Schippers finished fifth in the 60m at this year’s European Indoor Championships with a 7.14 PB.

Another rising star is Swedish junior Sofia Linde, who finished fifth in the Pentathlon with 4531 at the European Indoor Championships on home soil in Gothenburg after setting PBs in all five events. It was the third-best junior performance in history and missed Carolina Kluft’s national junior record by four points. Still a junior next year, Linde could follow in the footsteps of former Olympic champion Kluft, who won in Gotzis five times in a row from 2003 to 2007.

Eighteen heptathletes with a PB of more than 6000 points will take part in this year’s Hypo Meeting.

Olympic champion and World record-holder Ashton Eaton was unfortunately forced to withdraw from the Hypo Meeting due to a minor injury which his coach Harry Marra described as “kind of like a strain” of a tendon behind his knee.

His withdrawal was a precautionary measure to avoid any risk one month before the US National Championships in Des Moines, where he will have to finish in the top three to qualify for the IAAF World Championships in Moscow.

Despite the absence of Eaton, the men’s Decathlon line-up features a high-quality field with no less than 20 decathletes with a PB over 8000. The fight for the title will be an all-European contest between Eelco Sintnicolaas from the Netherlands and Pascal Behrenbruch from Germany, who finished second and third respectively in Gotzis last year.

Sintnicolaas capped an impressive indoor season with the European indoor gold title in March with a national Heptathlon record of 6372 to add to his national Decathlon record of 8506 from last year, set when finishing just 13 points behind Hans Van Alphen in a dramatic competition in Gotzis.

Behrenbruch followed up his outstanding third place in Gotzis to win the European title in Helsinki last year with 8558. The German then finished 10th at the Olympics with 8126 points and placed second in the 2012 IAAF World Combined Challenge rankings.

Behrenbruch is one of many strong Germans who will be in Gotzis. The others include Olympic sixth-place finisher Rico Freimuth (8322 PB), the son of Uwe Freimuth, who won in Gotzis in 1985 and 1988, 2004 World junior bronze medallist Norman Muller (8295), 2008 World junior champion Jan Felix Knobel (8288) and national champion Kai Kazmirek (8130).

The new generation is represented by 2012 World junior champion Gunnar Nixon from the US (7892) and 2010 World junior champion Kevin Mayer from France, who made a big breakthrough earlier this year to win European indoor silver with a Heptathlon PB of 6297, setting PBs in six of the seven events. In Gotzis he will be looking to improve his Decathlon PB of 8415 set last year.

Former World record-holder Roman Sebrle, who 9026 PB still stands as the meeting record, was expected to make his farewell 15th appearance in Gotzis, but he will not be able to take part because of a heel problem and will instead be the honorary guest of the meeting.