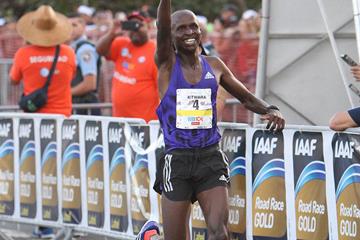 The Bank of America Chicago Marathon organisers will have a different type of competition in store for the IAAF Gold Label Road Race on Sunday (11).

Pace makers have been taken out but instead there are two men with personal bests faster than 2:05 and three women who have run faster than 2:23.

Sammy Kitwara enters his fourth Chicago Marathon with slight progression over the past three years. Kitwara was fourth in 2012, finished third in 2013 and was the 2014 runner-up behind Eliud Kipchoge. His personal best of 2:04:28 was set last year in Chicago and tops the rest of the elite men’s field.

Ethiopia’s Tsegaye Kebede, the 2012 winner, was initially announced as one of the headliners for the field but later withdrew due to illness.

This year’s Tokyo Marathon champion Ndeshaw Negesse, another athlete with a sub-2:05 PB, was also due to compete, but he has been forced to miss the race due to visa issues.

On the women’s side, Kenya’s Florence Kiplagat comes back to Chicago after finishing second in 2:25:57 last year. Among her biggest challengers will be Ethiopian Mulu Seboka, who has been racing the marathon since 2003 and set a personal best of 2:21:56 in Dubai earlier this year.

Ireland’s two-time European cross-country champion Fionnuala Britton will be chasing an Olympic qualifying time in the marathon. Britain’s Susan Partridge will head to Chicago with the same goal, while Burundi’s Diane Nukuri and Denmark's Jessica Draskau Petersson are also in the field.

Kitwara hopes to finally get his due

It will be interesting to see how the lack of pace-makers affects the likes of Kitwara, who can handle a fast pace and thrived in the previous three Chicago Marathons.

Kitwara was third behind Dennis Kimetto and Emmanuel Mutai, both runners that have previously won World Marathon Majors. Against both those runners and even stiffer competition, Kitwara was sixth in April’s London Marathon.

Kitwara is coming off a victory at last month’s Luanda Half Marathon, where he ran 1:00:25 to win by 44 seconds.

Without the likes of Kipchoge or Kimetto to stand in his way for a fourth year, Kitwara is the favourite for Sunday’s race.

In February, Kiplagat lowered her own half-marathon world record by running 1:05:09 in Barcelona. Kiplagat has fared well in the marathon since her debut and Chicago will be her ninth time tackling the 26.2 mile distance.

On the World Marathon Major stage, Kiplagat has yet to capture a Chicago Marathon title as she has twice won Berlin and finished runner-up in London.

Among Kiplagat’s biggest challengers will be Tokyo Marathon champion Birhane Dibaba, who finished behind her in last year’s Chicago Marathon. She made her marathon debut at 18 with a fourth-place finish at the 2012 Zurich Marathon in 2:33:07.

Dibaba has lowered her personal best each year coming into her second marathon of 2015. Dibaba was victorious in Tokyo with a 2:23:15 run and another victory would put her atop the Abbot World Marathon Majors leader board.