New Zealand’s Brent Newdick faces a challenge from two young compatriots as the IAAF Combined Events Challenge for 2015 gets under way at the Oceania Championships in Cairns on Friday (8).

Newdick last surpassed the 8000-point mark in 2012, the year he finished 12th in the decathlon at the London Olympics. He has not been near that level since, but he may need to find something to stay ahead of the competition in Cairns.

In February, Newdick won the decathlon at the New Zealand Combined Events Championships from one of his main rivals in Cairns, 18-year-old Aaron Booth. But it was close: 7034 points to 6983.

Booth won the decathlon at the Australian Junior Combined Events Championships in Brisbane in March with a total of 7379, competing with the junior implements. It only takes an incremental improvement since to have him right up with his older rival.

Another New Zealand teenager, Alex Mander, is also in the field in Cairns.

In the women’s heptathlon, New Zealand’s Veronica Torr, who has a best this year of 5665 from the Australian Championships in Brisbane, is clearly ahead of her rivals on past performances.

Torr had been out of action for most of the past three years due to various injuries, but she now looks poised to get back to the level that brought her a PB of 5837 in 2012.

The Oceania Championships is the first of 12 combined event competitions – 14, if you count the European Cup Super League and 1st and 2nd Leagues as three competitions – comprising the IAAF Combined Events Challenge.

From Cairns, the challenge moves to Europe for the traditional Multistars (Florence, 15-16 May) and Hypo-Meeting (Gotzis, 30-31 May) competitions, then across to North America for the Combined Events Capital Cup in Ottawa (19-20 June) and the US Championships in Eugene (25-28 June) which overlap with the Ratingen Combined Events (27-28 June).

The European Combined Events Cup competitions are in Aubagne, France and Inowroclaw, Poland on 4-5 July before the challenge crosses to Asia for the FISU Universiade in Gwangju, Korea (8-12 July).

The final three legs of the challenge will be the combined events at the Pan American Games in Toronto (18-26 July), the IAAF World Championships in Beijing (22-30 August) and the Decastars Meeting in Talence, France (19-20 September).

The challenge is decided by the best three-competition points total. The 2014 men’s winner, Germany’s Rico Freimuth, was remarkably consistent across his three events – each of them in the 8300s with a high of 8356 and low of 8308 – while second-placed Eelco Sintnicolaas of the Netherlands bolstered his score with an 8478 at the European Championships. Freimuth’s margin across the three competitions was 186 points.

Yordani Garcia of Cuba was third ahead of Aleksiy Kasyanov of Ukraine and Great Britain’s Ashley Bryant as five different nations were represented in the top five.

In the women’s challenge, Nadine Broersen of the Netherlands averaged more than 6500 points in her three scoring competitions. The world indoor champion won by 409 points from Germany’s Carolin Schafer with another German athlete, Lilli Schwarzkopf, in third. Eliska Klucinova of the Czech Republic and Yana Maksimava of Belarus rounded out the top five.

The timing and location of the World Championships will dictate the competition programme of most athletes this year, especially the combined eventers. The traditional Gotzis meeting will be the jumping off point for many.

The heptathlon at the Austrian meeting will see Olympic champion Jessica Ennis-Hill return to combined event competition for the first time since her home soil triumph in London. She will find it hard enough to be the first British athlete home, much less the overall winner, as compatriots Katarina Johnson-Thompson, the 2014 Gotzis winner, and world junior champion Morgan Lake (just 17 years old) will also compete.

Brianne Theisen-Eaton and Dafne Schippers have also been announced for Gotzis. Schippers, the double European sprint champion last year, is using the event to gauge whether she will contest the sprints or the combined events later in the year in Beijing.

Eelco Sintnicolaas in the decathlon gives the Netherlands a strong entry in both competitions, while world record-holder and Olympic champion Ashton Eaton and two-time world champion Trey Hardee fly the US flag.

Germany will also play a strong hand in Gotzis with Freimuth contesting the decathlon and Schafer and Schwarzkopf down for the heptathlon.

It seems the competition will be hot from the first event to the last in the 2015 IAAF Combined Events Challenge.

BACK
Pages related to this articleAthletes
Brent Newdick 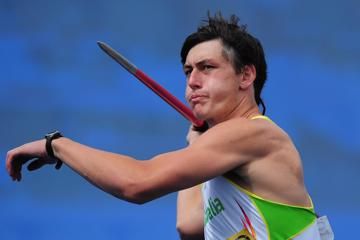