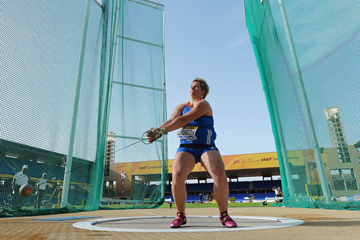 Anita Wlodarczyk had a disappointing start to the season with two losses, her first since 2014, but since then, the world record-holder has been her usual dominant self.

The Pole took her fourth European title and was the overall winner of the IAAF Hammer Throw Challenge for the sixth consecutive year. Her 79.59m also makes her the clear world leader.

DeAnna Price is second on this year's world list with the 78.12m North American record she threw to win the US title. Price was also the winner at the recent NACAC Championships.

Luo Na of China has improved significantly this year to become Asia's top thrower. With a best of 75.02m and gold at the Asian Games, she looks well poised for a high placing.

World bronze medallist Alexandra Tavernier is the second European entry. She broke the French record with 74.78m to take the European silver medal.

Also in the field are the African champion Soukana Zakkour of Morocco and the South American gold medallist Jennifer Dahlgren of Argentina.