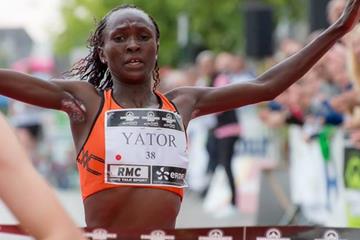 Amare to defend her title in Langueux 10km

Ethiopia’s Meskerem Amare will be looking to retain her title at the 27th edition of the Corrida de Langueux, an IAAF Bronze Label Road Race, on Saturday (18).

This men’s contest, which will crown a new champion, is expected to be a wide open contest. Dawit Fikadu, who was third in Langueux in 2014, can boast of having the fastest personal best of the field. Although he is the only athlete to have a sub-28:00 PB to his credit thanks to his 27:56 set in Casablanca in 2016, the 21-year-old Bahraini hasn’t showed good form yet this season, finishing runner-up twice over 10km in 29:57 and 29:34. Will the 2014 Sao Paulo Corrida champion be recovering all his means?

Kenya’s Patrick Mutunga appears to be a strong opponent on the heels of his career best of 28:39 set in Settat one month ago.

Not to be discounted as well is Morocco’s Hicham Laqouahi. The 28-year-old athlete finished seven seconds behind Mutunga in Settat when he clocked a 28:46 PB. He will be aiming to confirm this performance on Saturday. Laqouahi was also second at the Marrakech marathon in a best of 2:10:24.

Peter Limo will be looking to glean a second victory this season following a win at the Half Marathon of Meknès in a PB of 1:01:29. Two weeks later, at the end of February, Limo finished runner-up in Casablanca in a best of 28:51.

His compatriot Bernard Kitur will also be a man to watch. The 27-year-old has showed his good form clocking a best of 2:08:38 in the marathon in April. Nevertheless he might lack speed work to run fast in Langueux.

Ethiopia’s Fikadu Haftu has good credentials with a 1:01:02 best over the half marathon distance set last year in Copenhagen as well as a 28:17 10 km personal best set in 2012 in Langueux. But his current form in unclear as he ran only one race this year, placing 10h at the Shanghai Half Marathon in 1:04:20.

Other men who could come up trumps include Tefera Mosisa, sixth in the U20 race at the 2017 IAAF World Cross Championships and Vincent Nchongu, who won the Valenciennes 10 km.

On the women’s side Amare will be looking to follow up on her success from 2016 when she clocked 32:31, 16 seconds shy of her best set in Houilles in 2015. But it won’t be an easy task for the Ethiopian, who improved her half marathon PB in April with a time 1:10:00, as she will face Kenya’s Gladys Yator. The 25-year-old ran a 31:40 course record in Langueux two years ago, which is the fastest PB of the women’s field.

This year she prevailed in the two 10km in which she took part, breaking the tape in 32:16 in Edinburgh and 33:10 in Settat last month.

The evergreen Christelle Daunay should also be a strong opponent. The 2014 European marathon champion, who turned 42, knows very well the roads of the little Breton town as she set her PB of 31:46 over the distance back in 2011. Daunay, who last year took the French title finishing just four seconds behind Amare, was runner-up in Manchester last May in 33:08.

The Polish pair of Martha Akeno and Karolina Nadolska could also be a threat. The former set a best of 32:40 in Casanblanca recently while the latter, who has a PB of 32:29 over the distance, won the Poznan Half Marathon in a career best of 1:09:54 three weeks ago.