When David Rudisha steps to the line for the men’s 800m, the penultimate event of the Sainsbury’s Glasgow Grand Prix – the ninth of the 2014 IAAF Diamond League meetings – on Friday and Saturday (11-12), it will be two years minus 28 days since the great Kenyan’s last competitive appearance on UK soil.

On 9 August 2012, Rudisha produced what many regard as one of the greatest athletics feats of modern times, running solo to win the Olympic title in a barrier-breaking world record time.

The memory of that extraordinary performance adds a certain air of anticipation to the 25-year-old’s return to Britain this weekend.

Temporarily switched from its traditional home in London while the Olympic Stadium is reconfigured to accommodate football, the two-day meeting at Hampden Park is the first ever IAAF Diamond League event to be held in Scotland and doubles as a rather high-class test event for the Commonwealth Games, whose athletics programme will be held in the same 111-year-old venue – itself a football ground re-jigged for the occasion.

The former world junior, two-time African, world and current Olympic champion will be racing on Saturday for only the third time this summer following an injury-curtailed season in 2013, and is looking to build on his victory in New York a month ago.

“I haven’t competed in the UK since winning gold at the Olympics, so to return to the UK for the Glasgow Grand Prix is something I’m really excited about,” said Rudisha.

“Winning gold at the Olympic Games and being the first ever athlete to go below the 1:41 barrier is my biggest achievement to date. Having only just returned to track action, my victory in New York has given me a lot of confidence and something I will take with me to Hampden Park.

“The Glasgow Grand Prix will give me the best possible preparation for the Commonwealth Games. I know the field will include not only the best athletes in the Commonwealth, but the world too. I know I will have to perform at my best to secure another victory.”

A second IAAF Diamond League win would put Rudisha on top of the men’s 800m Diamond Race standings, although he may well have to improve on his New York time of 1:44.63, nearly four seconds outside his world record.

In Glasgow, he will face three men who have run quicker this year, including one of his Commonwealth rivals, South Africa’s Andre Olivier, and fellow Kenyan Job Kinyor, who won the IAAF Diamond League race in Eugene at the end of May when Rudisha was seventh.

Rudisha is not the only London 2012 star returning to the UK to prove their worth. Double Olympic silver medallist Yohan Blake, who also missed much of last year with injury, goes in a men’s 100m scheduled to bring Friday evening’s action to a close.

Blake, the second-quickest man of all time with 9.69, has a season’s best of 10.02 from early June, the same as two compatriots in the Glasgow line-up, Nickel Ashmeade and Nesta Carter, while USA’s Mike Rodgers and Richard Thompson of Trinidad and Tobago lead the field with sub-10 times in 2014.

“After such a strong 2012, it was disappointing not to be able to continue that form into 2013 due to injury,” said Blake. “I know it won’t be easy, but I’m determined to show that ‘The Beast’ is back, bigger and better.”

Fellow Jamaican Stephenie Ann McPherson, Botswana's former world champion Amantle Montsho and the US pair of Francena McCorory and Natasha Hastings will be among those trying to stop Williams-Mills.

Hassan back in action

Friday’s track events also feature two athletes who posted world-leading times in Paris last weekend, Dutch record breaker Sifan Hassan, who again takes on Sweden’s world champion Abeba Aregawi and Kenya’s Hellen Obiri in a loaded women’s 1500m; and Kenyan Edwin Soi, who will be keen to follow up his sub-13 5000m in the French capital with another victory over a packed field, including Ethiopia’s Diamond Race leader Yenew Alamirew.

Kovacs leads the world this year with his 22.03m effort from the US championships, but he couldn’t reach 20 metres in the Saint Denis stadium where Hoffa was Storl’s closest rival.

Rudisha aside, there’s plenty of high-quality Diamond League action on Saturday too, not least in the women’s 200m where neither world champion Shelly-Ann Fraser-Pryce nor Olympic champion Allyson Felix will start as favourite.

Both are currently struggling to overcome the lingering effects of injuries, while the Glasgow line-up includes two in-form sprinter-long jumpers in Eugene winner Tori Bowie, the quickest woman over half a lap of the track in the world this year, and Nigeria’s Blessing Okagbare, who has already won Diamond League 200m races in Shanghai and Paris.

Queen of the track?

In the 100m hurdles, Queen Harrison is looking to get back to winning ways after losing in Paris to Dawn Harper-Nelson, despite running 12.46.

Harrison is one of five quality US sprint hurdlers in the line-up, although many onlookers will be keen to see if Australia’s out-of-sorts Olympic champion Sally Pearson can return to top form in time for the Commonwealth Games.

It’s tight at the top of the steeplechase standings too where Paris winner Hiwot Ayalew is closing in on Sofia Assefa.

The Ethiopian pair will face the woman who separated them last weekend, USA’s Emma Coburn, plus Kenyan duo Milcah Chemos and Lidya Chepkurui.

The women’s high jump brings Blanka Vlasic back to the UK for the first time since 2011 and the Croatian will be in confident mood after winning in Paris and clearing 2.00m outdoors for the first time this year. Vlasic faces Russia’s Olympic champion Anna Chicherova.

The 2011 world pole vault champion, Fabiana Murer, will aim to bring a smile back to Brazilian faces with a victory over USA’s Olympic champion Jennifer Suhr, while Will Claye needs to add a couple of centimetres to his US championship winning distance of 17.75m to go to the top of the men’s triple jump world list. His compatriot and Olympic champion Christian Taylor should be his main opponent again.

In the men’s javelin, Czech world champion Vitezslav Vesely brings renewed confidence to his ongoing tussle with Finland’s Tero Pitkamaki after throwing 87.38m in Ostrava. The former and current Olympic champions, Andreas Thorkildsen and Keshorn Walcott, are also in the field.

With two sessions to fill, there is also plenty of top-notch action in non-Diamond League events.

The men’s long jump should also be worth watching, if only to see if British record-holder Greg Rutherford can live up to the legacy of his great-grandfather, Jock Rutherford, who played for the England football team which drew 1-1 with Scotland at Hampden Park in 1908 in front of a then world record crowd of 121,452.

“Hopefully it is a good omen that a world record was set the last time a Rutherford took part in competitive sport here,” said Rutherford, who will take on US champion Jeff Henderson in front of a somewhat smaller gathering of about 20,000 on Saturday. 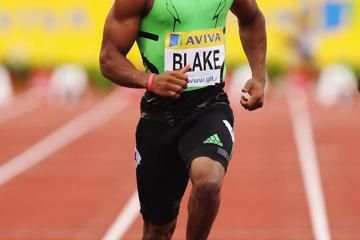 Blake to take on Kilty, Gemili and Collins in... 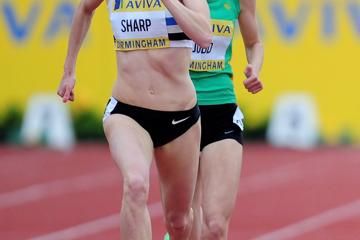 Sharp ready to take in ‘electric’ crowd in Gl... 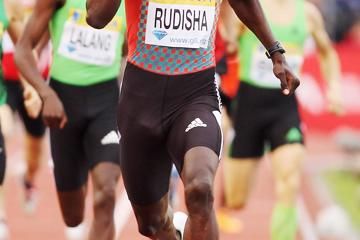 Rudisha, Jeter and Eaton among the many globa... 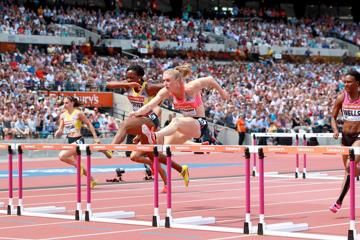