Deek starts the number game at the 2014 Gold Coast Marathon

The elite runners in Sunday’s Gold Coast Marathon received their race numbers from Australian marathon legend Robert de Castella at a media conference on Friday afternoon (4), but the question exercising everyone’s mind was: “Will anyone have Deek’s number on Sunday morning.”

De Castella had plenty of impressive numbers throughout a stellar career – number one in the world as the winner of the marathon at the first IAAF World Championships in Helsinki back in 1983, fastest in the world with what was then a world best at the 1981 Fukuoka Marathon, and a winner in Boston and Rotterdam.

But the number on everyone’s minds on Sunday will be de Castella’s Australian all-comers mark of 2:09:18, which he ran in winning a stirring duel with another 1980s marathon great, Tanzania’s Juma Ikangaa, to win the Commonwealth Games marathon in Brisbane, a short trip up the road from Gold Coast.

Sunday’s race has been accorded IAAF Gold Label status, a step up from the Bronze status of last year and a recognition of the Gold Coast race’s determination to attract a top international field for the marathon, which is the jewel in the crown for a weekend of events.

Looking at the field assembled for Sunday’s race, all those numbers should be attainable. Marathon chief executive Cameron Hart certainly thinks so.

“In the past, we’ve had two go very close to it,” said Hart, referring to the all-comers mark, “but they’ve been runners out on their own.

This year there’s more, 13 who have a chance by Hart’s reckoning.

Crucially, they will be led for 25-30km by a pacemaker, the respected US distance runner Sean Quigley.

A sub-2:10 and successful assault on Deek’s all-comers mark looks like a very strong possibility, considering the strength of the elite men’s field.

The indefatigable Kawauchi, who has a personal best of 2:08:14 and seems capable of grinding out a world class marathon a month, equalled that record last year. The clock on the finish line indicated a 2:10:00 as he crossed, but the time was adjusted up after careful examination of the photo-finish.

There are five more sub-2:10 runners rounding out the elite field and another handful with aspirations towards that elite territory.

“I think it could be a 2:07 or 2:08 race,” said Manza this week. Fujiwara went further, predicting the all-comers mark would also go.

The record has survived several determined assaults in the past few years. With the race usually run in sunny conditions and getting warmer, the sting is always in the tail of the Gold Coast race.

One sentimental note for Australian fans is the appearance of Lee Troop, twice a sub-2:10 marathoner, in what he says will be his final Australian marathon (he also intends to run New York later in the year).

The women’s race is also strong, though not as strong as the men. Pamela Chepchumba boasts the fastest personal best, but her 2:25:36 dates back to 2007.

Race organisers have done everything right to assemble strong fields. The question remains: will the numbers fall their way on race day.

BACK
Pages related to this articleAthletes
Pamela Chepchumba 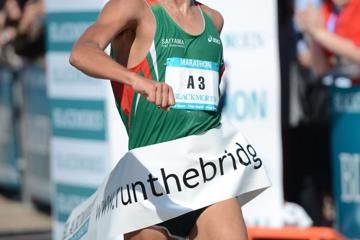 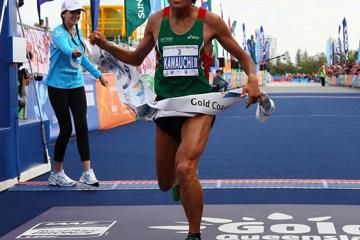