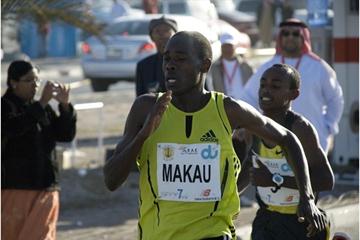 Deriba vs Makau; women’s race tougher to call at RAK Half Marathon - PREVIEW

The packed elite fields anticipating super-fast racing in the third edition of the RAK Half Marathon on Friday (20), have arrived at their luxury resort base, as final preparations for this rapidly growing annual contest, this year attracting almost 2000 entries, conclude.

The RAK Half Marathon is an IAAF Silver Label status road race.

The ambitions of Race Director Nathan Clayton are simple - to stage a truly world class competitive race, while creating the conditions for possible record setting. In the two previous editions, this approach has resulted in an unofficial men's world best by Sammy Wanjiru (58:53) in 2007 and another sub-60 minute clocking by fellow Kenyan Patrick Makau (59:35) in 2008, with Makau's winning margin being less than one second over Tsegaye Kebede of Ethiopia.

This year, timing mats and manual timers will be on hand at both the 15km and 20km marks to officially record these race splits in what is anticipated to be another extremely fast race.

While Makau is back to defend his title from last year - his record in RAK is unrivalled, having placed second in 2007 to Wanjiru's stunning time - arguably the race favourite this year is Ethiopia's Deriba Merga, currently enjoying a streak of wonderful form. The quality of his performances over the last twelve months, indicates great things to come - possibly before this weekend: April 08, 6th London Marathon (2:06:38); Aug 08, 4th Olympic Games (2:10:21); Nov 08, 1st Delhi Half (59:15); Jan 09, 1st Houston Marathon (2:07:52). While that Houston win on 18 January will have been less than five weeks before this Friday's contest, the multi-talented Merga was sufficiently recovered within three weeks, to record a 15km time-trial in the thin air of Addis Ababa, in 42:16. Should he win, he has promised to literally sing for his post-race dinner; the 26-year-old - we are told - has the voice of an angel.

Makau for his part, having battled his way out of poverty through running, has become the most consistent half marathon runner in history. Six clockings under the hour for 21.1km in the last two years, makes clear this 23-year-old's base level. In 2008, he lost just two of his seven half marathons, losing by one second in New York (60:58 to 60:59) and taking a second consecutive silver at the World Half Marathon Championships in Rio de Janeiro. The staggering average of his six sub-hour runs is 59:15, and with his renowned sprint finish to call upon, that average could well go down come Friday morning.

For their part, the women's objective is to break 70 minutes by as much as possible - something that no less than eleven women in the line up have managed before. A World record might not be on the cards, but with seven of the women having run under 69 minutes there is good reason to believe a fast race is on the way.

Philes Ongori is the name to watch, partly because she is one of the Kenyan elite based in Japan, and one who races very rarely outside of that nation, and partly because she was the fastest half marathon runner in the world last year. Her relative inexperience of international racing however, makes for a fascinating clash with an array of talent that can boast correspondingly wide experience on the international stage. From double 10,000m Olympic Champion Derartu Tulu (ETH), to defending champion Salina Kosgei (KEN), the field oozes talent. Calling the winner in the women's contest is even harder than in the men's race.

In neither race should we discount the top Europeans involved: Viktor Rothlin (SUI) on the men's side and Aniko Kalovics (HUN) on the women’s, both in excellent form and ready to match the Africans.

The RAK is one of the world's quickest half marathon courses; dead flat, free-flowing roads around the city and its central lagoon, along with perfect weather conditions and very little wind at the early morning start time of 7.20am.

So just where is RAK, or Ras Al Khaimah to name it in full? It's a fair question; the fourth in size of the seven United Arab Emirates, about one hour's drive to the north of Dubai, does not command the same everyday media profile as some of it's neighbours. There are mountains and hot springs, the glorious Arabian Gulf, endless hours of sunshine, and the city of Ras Al Khaimah itself with its massive Saqr Port. It can boast one of the world's largest ceramics factories as well, but in a sporting context, this corner of Arabia has remained relatively anonymous until recently.

Note, there have been withdrawals through injury: Abderrahim Goumri (MOR) and on the women's side, Edith Masai (KEN).

RAK media dept for the IAAF