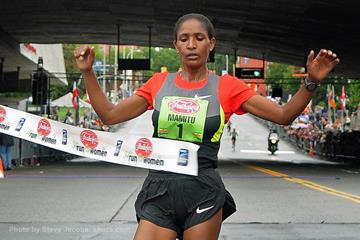 The intense rivalry between Ethiopian and Kenyan long-distance stars will be on full display on the streets of Albany, New York on Saturday (1) at the Freihofer’s Run for Women 5K, an IAAF Silver Label Road Race.

Returning champion Mamitu Daska heads up a talented Ethiopian squad, determined to keep the title she has held for the past two years at the prestigious all-women's event. Daska, who won back-to-back titles in Albany in 2011 (15:19) and 2012 (15:19), dominated the US road scene last year with victories at the Lilac Bloomsday 12km, Zazzle Bay to Breakers 12km, Bolder BOULDER 12km, AJC Peachtree Road Race 10km, and Boilermaker 15km.

The 29-year-old started 2013 in good form with victory at the Houston Half Marathon in 69:53, but suffered a blip at the Boston Marathon where she finished 12th.

”I am very happy to return to Albany for the 2013 Freihofer’s Run for Women,” said Daska, who has a Marathon PB of 2:21:59, set when winning the 2011 Frankfurt Marathon. “I am most excited about my chance to become the champion for a third year in a row. I feel like this would be a great honour and something I want very badly to do. I will do my best this year to win the race again.”

She will be ably supported by a strong contingent of her countrywomen. They include former Ethiopian record-holder in the 3000m Steeplechase Zemzem Ahmed, 2013 Dubai Marathon third-place finisher Amane Gobena, and 2013 Houston Marathon winner Merima Mohammed.

But a cluster of Kenyans, led by course record-holder Emily Chebet, could stand in the way of the Ethiopians. Earlier this year, Chebet won her second title at the IAAF World Cross Country Championships in Bydgoszcz, having won three years prior at the same venue. The 27-year-old has competed in Albany three times before, setting the course record of 15:12 in 2010.