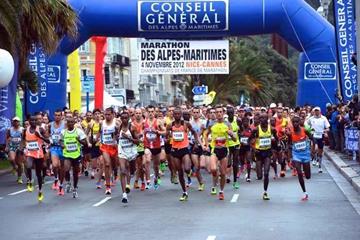 Sharew is the fastest man in the field by almost two minutes with a best of 2:08:10 from the 2010 Eindhoven Marathon. He has not quite been in that kind of form in his recent races but finished second at the 2013 Sevilla Marathon in 2:12:35.

On paper, his closest challenger should be Kenya’s William Biama, who finished second in the Marathon des Alpes-Maritimes Nice-Cannes 12 months ago in 2:10:36. He has a personal best of 2:09:53 from when he won the Kosice Marathon six years ago and will be a familiar face to many distance running fans along France’s Mediterranean coast as he was also second in the Marseilles Marathon earlier this year.

Another man to watch out for is Ethiopia’s Abdisa Sori. The former Ethiopian 1500m international ran a personal best of 2:10:15 in the Hannover Marathon last year.

One former champion also returns, Kenya’s Jacob Kitur, the winner of the inaugural Marathon des Alpes-Maritimes Nice-Cannes in 2008. Despite now being 40, and not having raced internationally this year, Kitur has previously been very consistent and ran under 2:13 twice in 2012.

There will also be a lot of interest in how Ethiopia’s Tigabu Gebremariam performs.

He made an unimpressive debut in last year’s Rome Marathon, coming home just inside 2:20, but showed good form in the Prague Half Marathon earlier this year when he clocked a personal best of 1:01.28.

In the women’s race, Ethiopia’s Woldegebriel Teamo Shumye, who won this race in 2011, is looking to make a comeback after 18 months out of competition.

Her biggest obstacle to regaining her title could be Kenya’s Salina Jebet Kosgei, the 2002 Commonwealth Games 10,000m champion.

Kosgei can boast of a Marathon best of 2:23:22 from 2006, when she finished second in the Berlin Marathon but she has not gone under 2:32 since she finished third in the 2010 Boston Marathon.

In addition to the Marathon itself, incorporated into the event there is also a 2x21km race and a Marathon Relay. In the latter event, a team of athletics legends will be competing with former 800m World record holder Wilson Kipketer, Morocco’s 1500m World record holder Hicham El Guerrouj and Burundi’s 1996 Olympic 5000m champion Venuste Niyongabo participating.

Sunday’s race will be started by Great Britain’s Marathon World record holder Paula Radcliffe. There have been over 12,800 entries from 62 nations for the various events on Sunday.