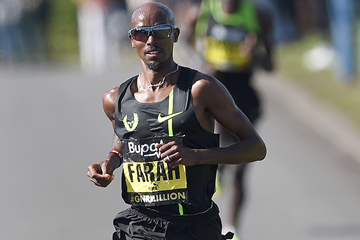 Farah the focus of attention at the Great North Run

The Morrisons Great North Run will welcome a field of about 57,000 runners of all abilities but the man getting the most attention at the IAAF Gold Label Road Race on Sunday (13) will be Mo Farah, the world 5000m and 10,000m champion..

Just a fortnight after retaining both of his world titles in Beijing, Farah will be hoping to repeat his success of 12 months ago when he became the first British winner of the race since Steve Kenyon in 1985.

The 32-year-old hero of the 2012 Olympics will be up against Kenya’s Mike Kigen, who pushed him all the way to the line last year, before Farah won in what was then a personal best of 1:00:00.

Farah has gone on to set a European record of 59:32 in Lisbon back in March, although it may well be difficult for Farah to repeat this sort of performance on Sunday because there has not been much time to recover from the challenging finals in Beijing.

The course record is held by Kenya's Martin Mathathi with 58:56 in 2011 although, as the Great North Run course is point-to-point and slightly downhill, it is not valid for record purposes.

Back-to-back wins are not common in the race’s history. If Farah does win again, he will become only the second Briton to win the race for a second time.

Only two men and two women have ever achieved this feat. Local star Mike McLeod won the first and second editions in 1981 and 1982 while Benson Masya matched this feat exactly 10 years later. The late Kenyan had a total of four wins, which is still unsurpassed.

It is nearly 20 years since a woman successfully defended her title. Britain’s Liz McColgan won in 1995 and 1996 while Australia’s Lisa Martin Ondieki took the race in 1986 and 1987.

In addition to Kigen, some other rivals will be familiar to Farah. Kigen's fellow Kenyan Stanley Biwott may well be the one Farah has to watch closely. He is the fastest on the start list with a best of 58:56, which he ran in the 2013 Ras Al Khaimah race.

This year he holds the world-leading time of 59:20, when he won in The Hague in March. He was also second in last year’s London Marathon with a world-class time of 2:04:55, a race in which Farah finished eighth.

Ryan Hall is the fourth athlete with a best below one hour although the US runner’s time of 59:43 is now eight years old.

Kenya’s Mary Keitany will be defending her women’s crown on Sunday.

In 2014, Keitany left her rivals trailing in her wake and before breaking Paula Radcliffe’s 11-year-old course record with 1:05:39 and then went on to win the New York Marathon last November.

Defending her title looks likely to be a tougher challenge for Keitany than it could be for Farah.

Among her main rivals is her compatriot Priscah Jeptoo, who won the Great North Run two years ago, clocking 1:05:45 in tough weather conditions. In the rain and wind, Jeptoo missed Radcliffe’s course record that day by just five seconds.

This year’s London Marathon winner Tigist Tufa, behind whom Keitany had to settle for second with the Ethiopian as the surprise winner, will run on Sunday.

However, only two weeks have elapsed since she placed sixth in the World Championships marathon in Beijing so it seems highly unlikely that Tufa will be able to challenge for the victory. Additionally, her personal best in the half marathon is a more modest 1:10:03.

Another Ethiopian who could be a more serious threat to Keitany and Jeptoo is Gelete Burka.

Burka has established herself as a world-class 10,000m runner this season with a world-leading time of 30:49.68. She was second at this distance in Beijing and will now run her first half marathon this year. Burka has only run one previous half marathon in her career, in the high altitude of Bogota where she clocked 1:15:38 in 2014.

Atsede Baysa, also from Ethiopia, may also do well. She has a personal best of 1:07:33 from 2013, but has not been at this sort of level so far this season.

Gemma Steel carries British hopes in the women’s race. She had a fine run a year ago, when she surprised with a second place and a personal best of 1:08:13.