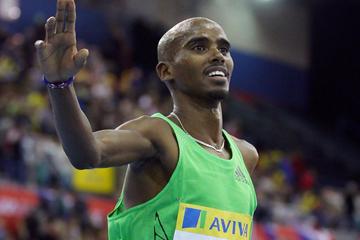 It’s just over six months since Mo Farah completed his historic distance-double at the Olympic Games in London, six months in which the British star has been appropriately fêted, lauded, awarded and celebrated in his home country.

Just how well he has weathered all the attention will begin to become clear on Saturday (February 16) when the US-based star tops the bill at the British Athletics Grand Prix in Birmingham – an IAAF Indoor Permit meeting – in his only appearance of the 2013 indoor season.

Farah’s 3000m has, of course, been set up as the climax of the UK’s showpiece indoor meeting with every expectation that he will have the noisy NIA crowd on their feet. The decibel level may not quite match that of the London Olympics, but judging by his previous performances at the National Indoor Arena there’s little chance Farah will leave his fans disappointed.

Last year Farah had to settle for second behind a rampant Eliud Kipchoge over two miles, but nevertheless added another European record to his list with 8:08.07.

It will be interesting to see how close he gets to his 3000m record this time, although the field appears to have been set up with a rousing victory in mind rather than a testing race or a super swift time.

There’s no place, for example, for the World junior record-holder and world leader Hagos Gebrhiwet, nor his almost as young and almost as quick compatriot Yenew Alamirew. Farah’s training partner Galen Rupp and the other in-form American Bernard Lagat are not in the line-up either.

All of which fits with Farah’s apparent desire to treat this race as a small step in his build-up to the IAAF World Championships in Moscow where he will defend his 5000m crown and 10,000m silver from Daegu.

“The big focus this year is the World Championships in Moscow,” he said. “I’ve had a good winter training block and the British Athletics Grand Prix will be the first time I compete this year, so I’m looking forward to getting back on the track in front of a home crowd.”

Most of the opposition will be home-based runners too, with Tom Humphries perhaps the best known, while the overseas challenge comes from two Frenchmen, Florian Carvalho and Yohan Durand, Andrew Poore of USA and Steve Scullion of Ireland.

The challenge will be a little tougher for two of Britain’s other stars, both flying high after the UK Championships in Sheffield last weekend.

Holly Bleasdale, who leapt to the top of the world lists with 4.77m, will take on Cuba’s Olympic silver medallist Yarisley Silva in the women’s Pole Vault, while Robbie Grabarz is predicting a winning height “around the mid-30s” when he takes on Olympic champion Ivan Ukhov and World silver medallist Aleksey Dmitrik in the men’s High Jump.

Bleasdale, who won bronze at the World Indoor Championships last year, is fully aware that the Cuban is chomping at her soaring heels having cleared 4.76m in Ukraine the same day as Bleasdale set the world lead.

“It’s going to be tough going up against the likes of Silva, but I’m in good form and I’m confident of performing well,” she said. “With the European Indoors getting closer I’ll be looking for a strong performance to set me up well for Gothenburg.”

Grabarz, one of the Olympic bronze medallists, is similarly confident ahead of his biggest clash of the year so far having narrowly failed to break the British record attempting 2.39m at the European Trials last Sunday. He cleared 2.31m easily, improving his season’s best by 2cm, while Dmitrik lies second in the world with 2.36m and Ukhov is close behind with a best of 2.30m.

“I think it will take a height higher than the Europeans to win in Birmingham this weekend,” said Grabarz. “Everyone’s jumping really well at the moment and a first-time clearance around the mid-30s will probably win it.

“Birmingham was the reason I attempted a big height at the European Trials on Sunday, as it would have been nice to get a world lead and put Ukhov and Dmitrik on the back foot.

“It didn’t happen, but I was close – I just need to control my excitement and I’ll come out flying.”

Coming out flying is usually the order of the day in the sprints and the meeting boasts two of the best 60m fields of the season.

Shelly-Ann Fraser-Pryce and Carmelita Jeter renew their rivalry in the women’s race after claiming gold and silver respectively in the Olympic 100m final last summer. Jeter has run 7.18 this year, while Fraser-Pryce steps into the unknown with her first taste of indoor action.

“I’m really excited about competing in front of a British crowd again and seeing what I can do over 60m,” said the Jamaican. “I have a good start in most of my races so hopefully that will help me competing over a shorter distance.

These two have won 18 global medals between them in the last five years, but victory will be far from certain for either on Saturday with world leader Murielle Ahoure in the line-up. The Ivorian’s Houston win in 7.00 last month is more than a tenth quicker than anyone else. Throw in Ukraine’s Mariya Ryemyen and USA’s Barbara Pierre (both have run 7.12), British champion Asha Philip (7.15), plus Jeter’s victor in Glasgow Verena Sailer (7.16), and it could be anyone’s game.

Jamaicans will be prominent in the men’s race too, not least Lerone Clarke, lying second in the world this year after running 6.52 in Düsseldorf, and World Indoor silver medallist Nesta Carter. Mike Rodgers of USA could be their main threat along with Kim Collins, one of three from St Kitt’s and Nevis, and British pair Dwain Chambers and James Dasaolu.

The men’s 60m Hurdles features the top four in the world this year – American Kevin Craddock and Russia’s Sergey Shubenkov, the quickest men so far with 7.50, Omo Osaghae of USA (7.52), and Cuba’s Orlando Ortega (7.54). Andrew Pozzi will be hoping to prove his fitness after pulling out of the UK Trials last weekend.

World indoor silver medallist Tiffany Porter will face US pair Danielle Carruthers and Christina Manning in the women’s race. Porter is the only one in the field to have dipped under eight seconds this year.

Olha Saladuha comes to the women’s Triple Jump in good form after leaping 14.52m in Düsseldorf a week ago. The World outdoor champion faces the World indoor champion, Yamile Aldama, plus Russia’s Victoria Valyukevich and Trecia Smith of Jamaica.

Natasha Hastings and Ebonie Floyd are the leading US women over two laps this year, and they line up in the women’s 400m against a British trio – Shana Cox, Perri Shakes-Drayton and Scottish record-holder Eilidh Child – plus Ksenia Zadorina of Russia.

Melanie Bauschke of Germany is the woman in form in the long jump field, while Olympic bronze medallist Yekaterina Poistogova will be the one to beat in the women’s 800m.

The 19-year-old Kenyan, Nancy Chepkwemoi, is the only non-European in the women’s 3000m. Thirty-nine-year-old Helen Clitheroe will be one of her opponents as the European indoor champion builds up towards her marathon debut in London this April.

Farah, too, will take on the marathon challenge in the not too distant future. First, though, he is focused on satisfying his British fans in Birmingham where another deafening afternoon is on the cards.