Dafne Schippers in action in the 200m in Hengelo (© Getty Images)

World 200m champion Dafne Schippers will target two stadium records at the AA Drink FBK Games on Sunday (22) when she lines up for the 200m and the 4x100m at the IAAF World Challenge meeting in Hengelo.

“I had a very good start to the season,” said Schippers, who is now one of the biggest sporting stars in the Netherlands following her gold and silver medals at last year’s IAAF World Championships. “I was satisfied with the 22.25 in Gainesville, as we had bad weather there. And the 10.83 in Doha made me very happy. I lost to Tori Bowie, but that’s how it works in sprinting: you win some, you lose some. That’s fine with me, as long as I will be on the podium in Rio.”

At last year’s FBK Games, Schippers won the 100m in a stadium record of 10.94, which was also a national record at that time until she reduced it to 10.81 at the World Championships. This year she has chosen to contest the 200m and has one eye on the stadium record of 22.46, set in 2009 by LaVerne Jones-Ferrette.

“Yes, it is possible to break that if the circumstances are not too bad,” said Schippers, who also hopes to improve the stadium record of 43.58 in the 4x100m when she and her teammates take on Great Britain, Poland and China.

The women’s 200m and 4x100m aren’t the only sprint events in which the fans will be hopeful of a home victory. Churandy Martina lines up for his first 100m of the season, having clocked 20.24 – his fastest season debut for eight years – at the IAAF Diamond League meeting in Doha.

World silver medallist Cindy Roleder will contest her first 100m hurdles race of 2016. The German will line up alongside European champion Tiffany Porter, two-time world indoor champion Lolo Jones of the USA and Dutch heptathlete Nadine Visser, who clocked 12.81 last year at the age of 20.

The men’s long jump field is led by China’s world bronze medallist Wang Jianan and Gao Xinglong, winner at the recent IAAF Diamond League meeting in Shanghai and at the IAAF World Challenge meeting in Beijing. Dutch record-holder and 2013 world silver medallist Ignisious Gaisah will be looking to achieve his first eight-metre jump of 2016.

USA’s 2013 world silver medallist Ryan Wilson is the fastest man in the field for the 110m hurdles, but compatriot and world indoor finalist Spencer Adams is the in-form athlete. Pan-American bronze medallist Shane Brathwaite of Barbados and European silver medallist William Sharman of Great Britain are also in the race.

“We are very satisfied with the field for Sunday, as we have brought together top international and national athletes,” said meeting director Hans Klooster. “This year our meeting is on the same day as Rabat, which is now a Diamond League meeting, but next year we hope to stage our meeting at the beginning of June.” 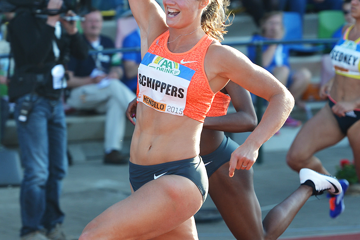