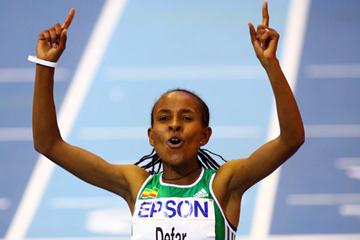 Focus on Defar and Lavillenie in Karlsruhe

London Olympic champions Meseret Defar and Renaud Lavillenie lead the parade of athletes who will compete on Saturday (2) in Karlsruhe, Germany, the first fixture in this season’s IAAF Indoor Permit meeting series.

This will mark the 29th consecutive yearly meeting at the Europahalle on Karlsruhe’s south side, one of the longest-running indoor competitions in Europe.

Making her first-ever Karlsruhe appearance, Defar will go to the line in the women’s 3000m and will have the meeting record of 8:36.87 in sight. The two-time Olympic 5000m champion holds the World indoor 3000m record with 8:23.72 which she established at the Stuttgart meeting six years ago.

The men’s Pole Vault will feature not only Lavillenie but also the two with whom he shared the London podium, Germans Björn Otto and Raphael Holzdeppe, respectively the silver and bronze medallists.

Lavillenie already has had a hot start this winter, increasing his season best with every outing and standing currently as the world leader with 5.92m. But Otto came close to that earlier this week in Cottbus when he cleared 5.90m, a world indoor masters M35 best.

The world-leading time of 7:42.79 in the men’s 3000m will likely not survive next weekend. Among those aiming at this target will be Kenya’s World indoor silver medallist Augustine Choge, who won in Karlsruhe last year in a gripping finish as he out-dipped Edwin Soi, both clocking 7:29.94.

One of the event’s ‘elder statesmen’, three-time World indoor champion Bernard Lagat of the US, will be on hand, as will Ethiopia’s Yenew Alamirew, the third-fastest man in history indoors over 3000m. Also in the field are European indoor silver medallist Hayle Ibrahimov of Azerbaijan and 2007 European indoor champion Juan Carlos Higuero of Spain.

The men’s Long Jump also brings a deep field to the Europahalle, with the last two European champions leading the list. Christian Reif, the 2010 winner in Barcelona and the world leader that year at 8.47m, has already reached the eight-metre mark this season, one of only four jumpers to do so. He will be joined by his countryman Sebastian Bayer, the reigning European champion and continental indoor record-holder, who is also the winner of the last two European indoor crowns.

Last year’s European champion Eloysé Lesueur of France and Beijing finalist Funmi Jimoh of the US are among the top entrants in the women’s Long Jump. Olga Sudareva of Belarus, who took the silver at last summer’s European championships, and Russia’s Veronika Mosina, a London Olympian in the Triple Jump who long jumped 6.71m one month ago, will contest the shorter event.

Sailer looking for another victory

Reigning European indoor champion Adam Kszczot of Poland and Kenyan Boaz Lalang, the 2010 World indoor silver medallist, are among the standouts in the men’s 800m. Spain’s Kevin Lopez, who took bronze behind Kszczot in Paris, will also go to the line, as will Britain’s Joe Thomas, Italy’s Giordano Benedetti of Italy, and Hungarian Tamas Kazi, twice a semi-finalist at the World Championships.

The women’s 60m Hurdles has no clear favourite. Based on 2013 times, reigning Pan-American champion Yvette Lewis of the USA and former European indoor silver medallist Lucie Skrobakova of the Czech Republic would appear to have a slight advantage. Russia’s World Championships finalist Tatyana Dektyareva will be making her season debut, while Germany’s Nadine Hildebrand, who ran 8.10 last weekend, should be a factor.

Orlando Ortega of Cuba, the sixth-place finisher in London last summer, brings the top resumé to the men’s 60m Hurdles, where he will encounter 2005 World champion Ladji Doucouré of France and World indoor bronze medallist Pascal Martinot Lagarde. World junior champion Yordan O’Farrill of Cuba will get a taste of the higher hurdles in his first-ever indoor race.