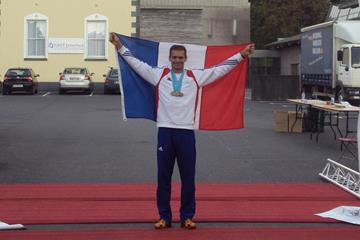 The fourth edition of the IAU Trail World Championships, which takes place on Saturday 6 July in the Wesh town of Llanrwst, will see both the defending men’s and women’s World champions Erik Clavery and Maud Gobert on the start line.

The beautiful town of Llanrwst is located in North Wales alongside the River Conwy, towering over the Snowdonia Mountains, is the Gwydyr Forest where the race will take place.

France’s Clavery is the favouritein the men’s race after his successes in the last two years at trail events around the globe.

Canada’s Jason Loutitt, the silver medallist from the last Championships in 2011 is injured but France’s bronze medallist from two years ago, Patrick Bringer, should be in contention for a podium place again.

Norway’s Torbjorn Ludvigsen and Italy’s Silvano Fedel just finished out of the medals last time around and could also be threats.

In the women’s race, France’s Gobert is the only one of the three medallists from 2011 to return but she should get a strong challenge frpom her compatriot Aurelia Truel, Italy’s Cinzia Bertasa and Australia’s  Kirstin Bull.

The competitors on Saturday will navigate their way along trails taking them past several scenic sections. Llanrwst is located in North Wales alongside the River Conwy and close to the Snowdonia Mountains.

The Gwydyr Forest is where the race will take place and the five laps on the 15km looped course will allow the athletes to test themselves on a technical and exciting course.

France had a strong showing in the team competition in Conneamara, Ireland, at the last edition in 2011 and they will be out to defend their two titles.

Italy, Norway, Spain and the USA will be vying for podium spots in the men’s team contest while Norway, Germany and Italy will have their eyes set on the women’s team podium. Host nation Great Britain will also be sending a very strong team to the Championships.