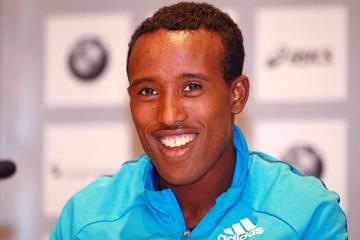 It's also thanks to Gebrselassie that Mekonnen has chosen Frankfurt for his latest marathon outing. The 19-year-old teenage sensation clocked a stunning, though unofficial, world junior best of 2:04:32 when he won the Dubai Marathon in January on his debut at the distance.

Now he hopes to improve that mark and has set himself the target of breaking Gebrselassie’s national record of 2:03:59, which was a world record at the time when he ran it in Berlin in 2008.

While Mekonnen hopes to become the first non-Kenyan men’s champion since 2001, there is also the possibility that Germany’s oldest city marathon will have its first double Ethiopian win on Sunday, as Aberu Kebede and Meselech Melkamu are strong contenders in the women’s race.

Relaxed and looking ready for the challenge, Mekonnen talked to a group of journalists through an interpreter just hours after his arrival in Germany’s financial capital. After winning in Dubai, Mekonnen ran his second marathon in London in April and despite a relatively short preparation period, he finished fifth in a high-quality race in 2:08:06.

It was there that he finally met his idol, Gebrselassie. The superstar surprisingly told him not to run in Berlin but to go to Frankfurt for further improvement.

“Haile told me that Wilson Kipsang ran two great races in Frankfurt,” said Mekonnen. Kipsang established the two fastest times ever run in Frankfurt with 2:04:57 in 2010 and 2:03:42 a year later. “Haile argued that beyond the 30km mark it would be easier to run well in Frankfurt than in Berlin.”

The fastest teenager ever in the marathon intends to improve his unofficial world junior best (the IAAF does not list junior bests in the marathon). “On Sunday I want to break at least one record: I would be very proud if I could break Haile’s Ethiopian record, but a personal best would also be a success for me,” said the youngster. “I am feeling stronger now than before the Dubai Marathon. I believe something is possible for me on Sunday.”

The reason why he is in the best form ever has to do with his success in Dubai. In the United Arab Emirates Mekonnen earned US$ 200,000, one of the highest prizes available in the sport. “The win in Dubai has changed my life. I was able to buy a house in Addis Ababa, I bought a car to be able to go to the training venues with it and I stopped school to concentrate fully on running. It is a completely different life for me now.”

When training near Addis Ababa, Mekonnen regularly meets Kebede, the fastest woman entered into the BMW Frankfurt Marathon with a personal best of 2:20:30. “I believe that at present Aberu is the strongest Ethiopian woman marathon runner. I think she can run very well on Sunday,” said Mekonnen.

“I have thought for a long time where to run my autumn marathon,” said Kebede, who ran her personal best when winning Berlin in 2012. “Berlin was an option, but I decided to come to Frankfurt.

Her training partners Tirfi Tsegaye and Feyse Tadese took first and second in Berlin a month ago. Tsegaye clocked a personal best of 2:20:18, the fastest time in the world this year on a record-eligible course, while Tadese finished just nine seconds behind. But reports from their coaches suggest that Kebede was the strongest in training.

“It is my aim to break my personal best on Sunday,” said Kebede. “I believe it is even possible to run sub-2:20 if weather conditions are fine. We will work together for a fast time.”

Melkamu is Frankfurt’s course record-holder with her time of 2:21:01, set on her debut at the distance in 2012. “Two years ago the weather was very cold here,” said Melkamu, who will change her hair colour to gold a day before the race to match the colour she had when winning here in 2012. “If conditions are good on Sunday then I want to improve my personal best.

“Originally it was my plan to prepare for the Dubai Marathon in January,” she added. “But my form was so good that I decided to run an autumn marathon and come back to Frankfurt.”