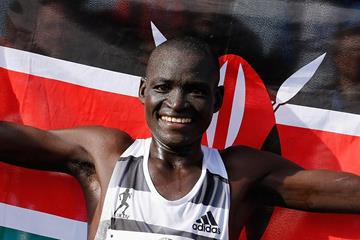 Kimetto hopes to bounce back in Fukuoka after Beijing disappointment

World record-holder Dennis Kimetto will be looking to bounce back at the 69th annual Fukuoka International Marathon on Sunday (6), an IAAF Gold Label Road Race, after his disappointing failure to finish at the IAAF World Championships Beijing 2015 in August.

"It has been tough for me," the Kenyan runner told local reporters in Nairobi prior to his departure for Japan on Wednesday. "I did well in training, but the body did not respond well when called upon. I am still devastated for not finishing the race in Beijing, but I have since done my homework and hope to return stronger in Fukuoka.

"There are two races left to be used to consider the participation in Rio but that is beside the point. The Olympics will fall in place only if I do my work in winning in Fukuoka; that is my target," he said.

"I want to go to the Olympics but that is not the concern at the moment. Winning Fukuoka is my priority and a faster time of under two hours and five minutes is my target."

If Kimetto – who ran the world record of 2:02:57 at the Berlin Marathon last year – achieves his ambition then he could break the course record in Fukuoka, which currently stands to Ethiopia’s Tsegaye Kebede who ran 2:05:18 in 2009.

Another three runners also have faster personal bests than the course record, including Patrick Makau, the defending champion and former world record-holder.

However, although the Kenyan won last year’s race, the winning time was a relatively modest 2:08:22 and Makau has not run faster since the 2012 Frankfurt Marathon, which he won with a time of 2:06:08.

Getu Feleke is a generally a consistent, if rather sparing, marathon runner. Except for his debut at the 2009 Vienna Marathon and later in the London 2012 Olympic Games marathon, where he dropped out, the Ethiopian has always cracked 2:10.

His personal best stands at 2:04:50 from when he finished second at the 2012 Rotterdam Marathon and in the past four marathons where he has finished, he has always come home either first or second with a time faster than 2:07.

Koech also needs to be considered

Kenya’s Bernard Koech, like Feleke, is also a consistent marathon runner with a best of 2:04:53 from his debut over the classic distance at the 2013 Dubai Marathon. Except for the 2013 World Championships, where he dropped out, Koech has always run faster than 2:08:30 in all of his completed marathons.

Martin Mathathi, a two-time World Championships bronze medalist, once at cross country and once on the track, won the 2013 Fukuoka Marathon and will also be on the start line.

The Kenyan has run three marathons in his career, all in Fukuoka. After failing to finish the race on his debut three years ago, Mathathi won two years ago with 2:07:16. But last year, Mathathi was a disappointing 21st with 2:17:23 so the question is which version of Mathathi will turn up in Fukuoka this year.

Samuel Tsegay Tesfamariam finished second at the 2014 IAAF World Half Marathon Championships and he may be on the verge of dramatically improving his personal best of 2:07:28. Another good Eritrean in the field is Amanuel Mesel, who has a best of 2:08:17.

In addition to dueling for a place on the podium, both men could also challenge their national record of 2:07:27, set by Yared Asmeron at the 2011 Chunchon Marathon.

The race also doubles as one of the qualifying races to select the Japanese marathon team for the Rio 2016 Olympics Games but Yuki Kawauchi is the only Japanese invited runner with a sub-2:10 personal best. Satoru Sasaki (best of 2:09:47) and Masashi Hayashi (2:09:55) are also in the field but not as invited runners.