Genzebe Dibaba will go for her third world record in a 14 days when she runs over two miles at the Sainsbury’s Indoor Grand Prix, the final IAAF Indoor Permit meeting this winter, in Birmingham on Saturday (15).

The Ethiopian, who has smashed the 1500m and 3000m world records in the past two weeks, is one of a host of global medallists on the bill at the National Indoor Arena, the venue for the 2003 IAAF World Indoor Championships.

Having taken more than three seconds from the 1500m record in Karlsruhe and then six off the 3000m mark in Stockholm last week, Dibaba is now targeting Meseret Defar’s figures of 9:06.26, set five years ago in Prague by her compatriot and two-time Olympic 5000m champion.

Dibaba, the world indoor 1500m champion, will have her fellow Ethiopians Hiwot Ayalew and Sentayehu Ejigu for company as she looks to end a six-year wait for a world record at the NIA and become the most prolific indoor record breaker in her family.

Dibaba has never run over two miles, indoors or outdoors, but the family record is held by her older sister Tirunesh, who ran 9:12.23 on the NIA track four years ago for the third fastest performance ever behind two outings by Defar.

World champions Shelly-Ann Fraser-Pryce, David Oliver, Mohamed Aman and Aleksandr Menkov are just a few, but perhaps the most prominent, of the other stars on show.

Like Dibaba, Murielle Ahoure may have world record figures on her mind too, but the US-based Ivory Coast sprinter will be up against two-time Olympic 100m champion Fraser-Pryce as they go head-to-head in the women’s 60m.

Ahoure got the better of her Jamaican rival in Birmingham last year when she clocked 6.99 to become the seventh quickest of all time. Irina Privalova set the world record of 6.92 back in 1993, but Ahoure has been in good form again this season, running 7.03 in Houston on 1 February to lead the world list.

Fraser-Pryce made her indoor debut at this meeting a year ago and has set her sights on a World Indoor Championships gold medal in the Polish city of Sopot next month. She ran 7.11 outdoors at a specially arranged race in Kingston last month and will be looking for an improvement here.

British champion Asha Philip could also be a threat as she targets the national record of 7.08. Philip was just 0.01 outside that in Sheffield last weekend, which puts her second on the world list.

There’s another tasty clash in the men’s 60m hurdles where world champion Oliver makes his season debut against his fellow US hurdler Aries Merritt, the Olympic champion and world record-holder at the 110m hurdles outdoors.

The talented French pair of Pascal Martinot Lagarde and Garfield Darien will provide an extra edge. They currently rank first and third in the world this year.

Dasaolu looking for a fast dash

Another British champion, James Dasaolu, will hope to cement his growing reputation in the men’s 60m.

Having picked up a European indoor silver last year, Dasaolu lies second in the world this year after clocking 6.50 twice.

He’ll also face a brace of Frenchmen in Christophe Lemaitre, the 2011 world 200m bronze medallist, and Jimmy Vicaut, the man who beat him to the European title in Gothenburg last year.

The Ethiopian duo Hagos Gebrhiwet and Dejen Gebremeskel are set for a re-run of their duel last weekend in Boston over the 3000m, an event which also features Ethiopia’s Yenew Alamirew and Kenya’s Augustine Choge, while Ethiopia’s Mekonnen Gebremedhin takes on Kenyan trio of Silas Kiplagat, Nixon Chepseba and Bethwell Birgen in the 1500m.

The men’s long jump could be the pick of the field event action with Menkov looking to continue his dominance of the event against the two men who finished immediately behind him at the 2013 World Championships: the Netherlands’ Ignisious Gaisah and Mexico’s Luis Rivera.

Menkov leads the world this year with 8.30m from the recent Russian Winter meeting in Moscow and will be looking for another solid performance in Britain’s second city as he gears up for a bid to add world indoor gold to his outdoor title.

China’s Li Jinzhe and Australia’s 2010 world indoor champion Fabrice Lapierre are also in the line-up, while Britain’s Olympic champion Greg Rutherford will make his only indoor appearance of the season after having pulled out of the Glasgow International with injury last month.

Holly Bleasdale will be keen to regain the lead in the pole vault rankings after she held top spot for less than a day last weekend. The in-form Briton will face Cuba’s Olympic silver medallist, Yarisley Silva, and the new Slovenian record-holder, Tina Sutej.

Hellen Obiri will be favourite in the women’s 1500m, while the 800m is set to be a battle between Ukraine’s Nataliya Lupu and Great Britain’s 2010 world indoor silver medallist Jenny Meadows. 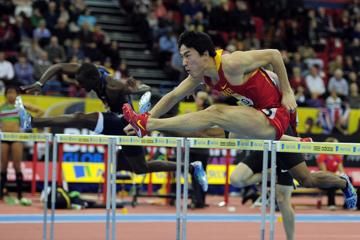 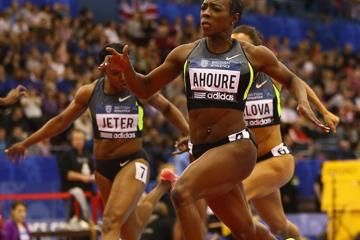