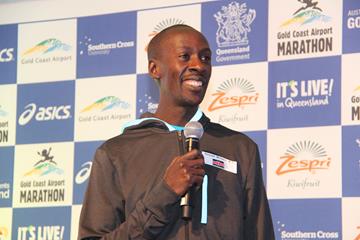 Kenneth Mungara set a race record, an Australian all-comers record and a world masters best when winning the 2015 edition of the Gold Coast Marathon and he may have to do all three again to retain his title at the IAAF Gold Label Road Race on Sunday (3)

Befitting its status as a top-tier IAAF road race, the Gold Coast event has put together fields which appear more than capable of improving on the 2:08:42 Mungara produced last year and the ever-so-slightly more venerable 2:27:17 women’s race record set by Japan’s Yukiko Akaba in 2013.

Fortunately, even approaching 43 – his birthday is 7 September – late-starter Mungara continues to improve.

Earlier this year, he finished third in Milan in a new world masters best of 2:08:38. If he is still racing well ahead of Father Time, who else can take the race off him on Sunday morning.

Leading the chasing pack on times is another Kenyan athlete, Peter Some.

Some finished ninth in the IAAF World Championships Moscow 2013 world marathon. He ran his personal best of 2:05:38 in winning the Paris Marathon earlier in 2013 and ran a faster time than Mungara’s best every year from 2012 to 2015.

Three others boasting 2:08 credentials: Willy Koitile, fourth in Milan this year, Milton Rotich and John Cheruiyot, round out a strong Kenyan men’s contingent.

Rotich has a best of 2:08:55 but has not run a marathon since 2014; however, Koitile and Cheruiyot both come into the race with good current form.

Yuki Kawauchi, whose name is rarely written without ‘the indefatigable’ preceding it, is returning for his fifth consecutive appearance. He won in 2013 and should be prominent again.

Given his frequent racing, Kawauchi’s form is hard to read, but he ran 2:12:03 in cold, wet and sleeting conditions to win the Zurich marathon earlier this year and set a Japanese record for 50km just a fortnight ago, so he is obviously fit and has a liking for this race.

Eritrea’s Beraki Beyene Zerea is next fastest to Some on career times with a best of 2:08:27. However he has run only 2:16 this year and failed to finish last year’s world championships race in Beijing, so he will need to be back in top form to challenge.

Mongolia’s Ser-Od Bat-Ochir has been to three Olympics and three world championships and boasts a 2:08:50 best. Although his recent marathons have not been as good as when he is at his best, he ran a personal best half marathon of 1:02:10 earlier in the year which suggests, at least, solid form.

Can Achamie raise his game?

Rounding out the sub-2:10.00 performers is Ethiopia’s Birhanu Achamie, who ran his best of 2:09:27 when finishing second in Rome earlier this year. Further improvement would see the 21-year-old right in the mix on Sunday morning.

The most illustrious entrant among the elite women is Japan’s Yoko Shibui with her track credentials and outstanding personal best marathon of 2:19:41. But that PB was set when winning Berlin back in 2004 and a more recent best of 2:31:06 suggests her aims may be more modest on the Gold Coast.

Ethiopian duo Gulume Tollesa and Meseret Biru – confusingly also sometimes known as Mengistu – each boast 2:23 credentials, and look set to break the recent Japanese stronghold on the women’s race, having won for the last four years.

Tollesa ran 2:23:12 in winning last year’s Frankfurt marathon and has a 1:08:40 half marathon best set earlier this year.

Biru won in Paris last year with 2:23:26, which is some five minutes better than her next fastest performance. She was sixth in the world half marathon championships in 2010.

If there is to be a Japanese winner for a fifth consecutive year, the best prospects may be Misato Horie and Rika Takenaka.

Horie’s best two performances – 2:27:57 in Nagoya in 2014 and 2:28:20 in Osaka this year – have come in women-only races so may be worth more than the raw times indicate while Takenaka was second in the Gold Coast race two years ago.

A number of athletes will be chasing late Olympic qualifying performances in the race, though with time running out before the Olympic marathon (14 August for the women, 21 August for the men) getting the standard at this late stage might turn out to be a mixed blessing.

For New Zealanders Paul Martelletti, Ben Ashkettle and Victoria Beck the secondary target may be the Oceania Championships, which will also be contested as part of the Gold Coast race.