Ethiopian athletes have won both the men’s and women’s races at the past seven editions of the Chevron Houston Marathon; a trend that looks set to continue at the IAAF Bronze Label Road Race on 17 January.

Birhanu Gedefa and Bazu Worku, who between them have won the past three Houston titles, lead the men’s field.

Gedefa was something of a surprise winner last year, clawing back a 14-second deficit in the last couple of miles to win in a lifetime best of 2:08:03. But the rest of his 2015 campaign wasn’t quite as successful. He finished fifth over 10km in Toronto in April and at the Beijing Marathon in September.

He will be aiming to become just the third man in the 44-year history of the race to win three times in Houston.

Girmay Birhanu also stands a good chance of maintaining the Ethiopian dominance in Houston. He finished two places behind Worku at last year’s Dubai Marathon, but went on to have a more successful season than his compatriot. He won in Daegu with 2:07:26 and then in Ottawa in 2:08:14 before ending his season with a fourth-place finish at the Chicago Marathon.

After finishing fifth in 2014 and fourth in 2015, Kenya’s Dominic Ondoro will look to at least make the podium this time, and perhaps even break the seven-year winning streak by Ethiopian athletes in Houston. The 27-year-old has a PB of 2:08:00, set when winning the 2013 Tibeiras Marathon.

Poland’s Artur Kozlowski leads the European challenge, while Ethiopia’s Yitayal Atnafu is one of a handful of debutants who could spring a surprise.

Although 2015 winner Yebrqual Melese won’t defend her title, three of the top-four finishers from last year will return to Houston.

If she sets out at a similar pace to last year, Shone could even challenge the course record of 2:23:14, set by Alemitu Abera in 2012.

Compatriot Biruktayit Eshetu Degefa will also be returning to Houston. She finished fourth in 2014 and third in 2015, setting personal bests on both occasions. If she continues that trend on Sunday, she will be a serious contender for victory.

Sechale Dalasa, who finished fourth in 2015, is also aiming to do better than last year. A 2:26:27 runner at best, she is yet to win a marathon, but her best finishes to date have all been in North American races.

Australia’s Lisa Weightman will be contesting her first marathon for more than two years. She set her PB of 2:26:05 in her most recent race over the classic distance, the 2013 Melbourne Marathon.

In the Aramco Houston Half Marathon held on the same day, Ethiopia’s Mare Dibaba will be contesting her first race since winning the marathon at the IAAF World Championships Beijing 2015. The Ethiopian has a PB of 1:07:13, which is more than a minute faster than the course record of 1:08:26 set in 2012 by Belaynesh Oljira.

World half-marathon silver medallist Mary Wacera and fellow Kenyan Cynthia Limo, the fastest woman in the field with a PB of 1:07:02 are also entered. Buzunesh Deba, the 2014 Boston Marathon runner-up, will be contesting her first half marathon in Houston, having finished second in the marathon in 2013.

Lelisa Desisa leads the men’s field. The Boston Marathon champion is undefeated in the half marathon since 2012 and has a PB of 59:30 for the distance. But compatriot Mosinet Geremew, who has a personal best of 59:11, will be the fastest man in the field. 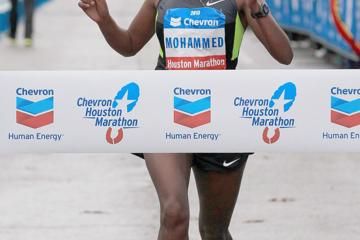 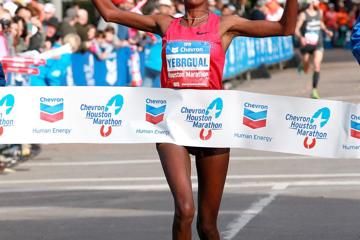