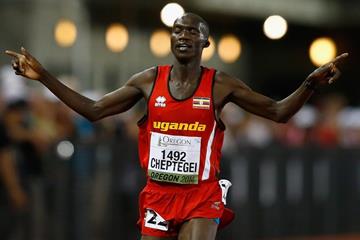 You have to go back to 1991 for the last time an athlete from somewhere other than Kenya or Ethiopia won the world cross country junior men’s title, but Uganda might have the man to end this quarter-century-long dominance at the IAAF World Cross Country Championships, Guiyang 2015 in the shape of Joshua Cheptegei.

Whether it’s against junior or senior opposition, the 18-year-old has excelled over the past 12 months.

At cross country, his win in the junior race at his domestic championships was a formality and against top-level senior opposition, the highly-vaunted Ugandan finished fifth and third respectively in IAAF Permit races at the Spanish venues of Seville and Elgoibar.

Since Boniface Kiprop won a bronze medal in 2002, Ugandan runners have picked up four more individual medals but the title has been a perpetual pass-the-parcel affair between Kenya and Ethiopia since Andre Sambu won for Tanzania in 1991.

A first title for Uganda will surely raise the excitement levels back home, as Kampala will be staging the 2017 edition of the World Cross Country Championships.

The only returning finisher from the top 20 in the junior race two years ago is Yihunilign Adane, who defeated more than 400 runners to win the Ethiopian junior cross-country title in February.

That performance alone, plus the fact he has two more years of training and experience in the bank, indicates he could improve substantially on his 13th-place finish from Bydgoszcz, although he was by no means confident he would even make the journey to Guiyang.

“I was so doubtful and was even worried about being left out of the Ethiopian team,” said Adane, sixth over 10,000m at the World Junior Championships last year, after sealing his place on the team.

On the whole, the Ethiopian team is a largely inexperienced one although Yasin Haji, who finished second to Adane at the Ethiopian Championships, will be chasing another international medal after winning silver over 5000m at the 2014 IAAF World Junior Championships.

Likewise, the Kenyan team is lacking in substantial international experience but it would be unwise to write off their chances of individual and team honours.

From their team of six, only John Langat and Moses Koech boast some international credentials.

Langat was fourth in the junior race at the African Championships last year while Koech, 17, will be making his second trip to China after winning bronze over 3000m at the Youth Olympic Games in Nanjing last summer.

Trials winner Dominic Kiptarus, who ran sub-8:30 for the 3000m steeplechase at altitude last year, will be making his first appearance in a Kenyan vest.

Bahrain is yet to claim any sort of individual medal at the World Cross Country Championships but this could change courtesy of the talented duo of Evans Chematot and Birhanu Balew.

Chematot won a bronze medal in the steeplechase at the 2014 World Junior Championships, while his little-known team-mate finished second in a top-level senior race in Hannut in preparation for Guiyang.

It will also be interesting to see how European junior cross-country champion Yemaneberhan Crippa fares on the global stage.

The 18-year-old easily won that title on the snow in the Bulgarian resort town of Samokov in December. He also ran out victorious in the junior race – albeit against non-African opposition – at the IAAF Cross Country Permit meeting in Edinburgh a month later.

Crippa, who is joined on the Italian team by Samokov bronze medallist Said Ettaqy, might find the medals just beyond his reach but he could challenge for a top-10 finish.