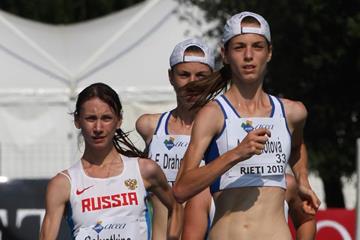 Both the individual and team gold medals in the first three junior women’s 10km races at the IAAF World Race Walking Cup went to Russia, but results in the last two editions suggest the teenage red army is not the force it was.

In 2010, when the Cup was held in the Mexican city of Chihuahua, it was Italy’s Antonella Palmisano who came from nowhere to triumph. Two years later, with Russia hosting the event in Saransk, it was Colombia’s Sandra Arenas who left a pair of early Russian leaders ultimately trailing in her wake.

In Taicang on Sunday (4), at the 26th edition of the Cup, it will also be quite a surprise if Russia wins a fourth individual title.

Despite the 2014 world season lists, where she lies a modest fifth, the favourite is Czech Republic’s multi-talented Anezka Drahotova.

The strikingly tall athlete showed no fear to lead the IAAF World Championship 20km beyond the halfway point last August, and now boasts a fast 1:28:13 for the distance, as well as winning the IAAF Challenge event on home soil at Podebrady at the beginning of April.

She admitted to initially being undecided about whether to do the junior 10km or the senior 20km event in Taicang but, with it being impossible to double, eventually the girl who will be just 19 in June decided on the shorter event against her peer group, partly as preparation for the IAAF World Junior Championships in July, when she will contest the same distance but on the track in Eugene.

As well as being good enough to compete for her country at cycling, she won the 10,000m race walk gold medal at the 2013 European Junior Championships, while her twin sister Eliska, also competing in Taicang, took the bronze medal.

In a rare combination of events, Drahotova also made the European Junior final of the 3000m steeplechase in the Italian town of Rieti last summer and placed ninth. She has also notched up several significant victories in Czech road races, running rather than walking.

If there is to be a challenge to Drahotova, the likely contender is China’s Duan Dandan, who leads the 2014 junior rankings with a personal best of 43:31.

Duan was also one of the few here who was also in Saransk, where she placed eighth. This time she will be disappointed with anything but a medal.

Barring disaster, the hosts seem to be on course for the team gold medal, regaining the title they won in 2010 when they interrupted Russia’s winning streak, with Yang Jiayu (44:16) and Hailu Cun (45:36) also re-writing their own bests earlier in the year.

As ever, Russia should be up with the leaders, but their team, chosen as a result of the Russian Winter Championships in Sochi, are inexperienced newcomers.

Times faster than 44 minutes have regularly been posted by the winners down on the Black Sea resort, but this year, in March, the European junior silver medallist Oksana Golyatkina, who was sandwiched between the two Drahotova sisters in Rieti, won in a more modest 45:16.

Russia surprisingly left out Sochi second-place finisher Nadezhda Mokeyeva, and instead selected the third woman home, Claudia Afanasieva, who has a best of 47:32, along with fourth-place finisher Anastasiya Chernova, who set a best of 48:16. But her inclusion only highlighted that, on paper, this is the weakest Russian trio in the 10-year history of the event.

If experience counts for anything, then in the junior men’s 10km on Saturday (3), the individual gold medal should be contested between the host nation’s Gao Wenkui and Australia’s Jesse Osborne.

Gao was in encouraging, but hardly breath-taking, form when finishing eighth in the 2012 Cup with 44:15. However, earlier this year, he bettered that mark by more than four minutes with 40:25. At the speed these elite athletes travel, that’s almost a kilometre better.

In fact, the 18-year-old is a clear front runner in terms of 2014 times and 32 seconds better than team-mate Jie Jinzhu.

Next on the list is Japan’s Yuki Kurumisawa, and then Osborne who was a distant 44th in Saransk with 44:15 but now has a best of 41:27 set earlier this year.

After that, one could throw a blanket over the next 11 teenagers, so close are they on form and times.

The adrenaline will inevitably course through young veins as they go to the start line and, when some throw caution to the winds and try to stay with the leaders, they will pay with hefty interest over the final three kilometres.

If you have been there already, as Gao and Osborne have been, not to mention the improvements both have made since 2012, they should both be somewhere on the podium.

Who will join them? Well, 24 of the 41-strong field have sub-44-minute times to their name, which might make this the most exciting race of the weekend as far as picking a team, or even an individual winner.

China look good for team gold but who to choose as Russia’s first past the post with Nikolay Markov’s 42:07 for the year, tying with Maksim Krasnov, and Denis Sergeev just a second behind his team mates.

The Spanish pair of Diego Garcia and Manuel Bermudez, along with Mexico’s Ricardo Ortiz, are also separated by just a few seconds in the world top 15. And should someone ask if there is a doctor in the house at the city 60km north west of Shanghai, they might well get told, “No, he is in the junior race".

Jose Luis Doctor, from Mexico, sports a healthy 42:21 going into the race that boosts hopes for a race walking nation steeped in success.