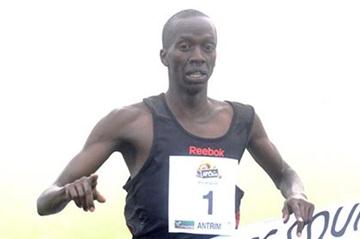 Mike Kigen of Kenya will be hoping to claim his third title in succession at this weekend's 35th Annual Antrim International, the seventh IAAF Cross Country Permit Race of the season which takes place on Saturday (21) at Greenmount.

Last year Kigen knocked 1:42 off his 2010 finishing time to claim gold for the second time ahead of fellow Kenyan Titus Mbishei on the 10.8km course, and will again face a tough challenge this time around.

There is a strong Kenyan line-up for the men's race, with Mbishei and third place finisher Jacob Cheshairi returning to the Northern Ireland venue, with the former posing a particular threat as he broke the 27-minute barrier for 10,000m last autumn.

Tickner has returned to good form after injury as shown by his fifth place in Edinburgh recently and an easy win at the McCain Challenge in Cardiff last week.

Eddie McGinley is expected to lead the Irish challenge. The Annadale clubman was an outstanding 15th at Greenmount last year. The firm, relatively flat conditions should enable him to get the better of rivals Joe McAlister, Andrew Agnew, Kevin Seaward and possible dark horse Stephen Scullion.

The 27-year-old Irish steeplechaser backed up her European victory in Velenje, Slovenia, by also taking gold at the Edinburgh International. Britton returns to the Greenmount course for the first time since 2010, where she claimed a fourth place finish.

She will renew her rivalry with European bronze medallist Gemma Steel whom she also defeated in Edinburgh.

The 25-year-old Steel has had victories this season in the Birmingham and Bristol Half Marathons, and then came second in the Liverpool trials before her brilliant run in Slovenia where she took the silver medal and led the British women to their second ever European team title at the event.

But African opposition will provide a stiff challenge for both women, with the field including a trio of World Junior Steeplechase medallists - Kenya's Purity Kirui and Ethiopian duo Birtukan Adamu and Mekdes Bekele.

The 20-year-old Kirui took the World Steeplechase title in 2010 ahead of Adamu, while last May Adamu posted an impressive 9:20.37 in Rome to set a new World Junior record and claim seventh spot on the 2011 world list. Bekele ran 9.26.51 last year to rank 12th in the world.

Also in the mix is Ethiopia's Waganesh Mekasha who was fourth in last year's World Junior Cross Country plus Britain's Lily Partridge who was a member of the winning European Under-23 team.

Local athletes will be competing for the Northern Ireland title which is now part of the International race.

Hot favourite for that is Dromore's Julie Turley who was a useful 14th last year with Breege Connolly, Sharon Bird and Cathy McCourt also expected to be in contention.