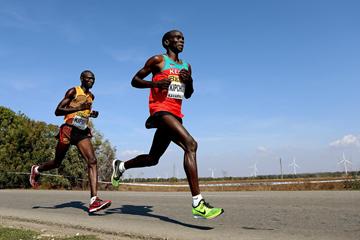 Kipchoge and Kiprop to chase course record in Hamburg Marathon

The Kenyan duo of Eliud Kipchoge and Wilson Kiprop will chase the Haspa Marathon Hamburg course record of 2:05:58, set last year Ethiopia’s Shami Dawit, when they compete in the IAAF Gold Label Road Race on Sunday.

Now 28, over the past decade he has established himself as one of the world’s best distance runners across various surfaces. After winning the junior title at the 2003 World Cross Country Championships, he went on to set a World junior record over 5000m and win a World title over the same distance later that summer in an epic battle with legendary athletes Kenenisa Bekele and Hicham El Guerrouj.

A superb indoor runner, he is one of just a handful of men to have broken 13 minutes for 5000m under cover.

The one surface left for him to truly conquer is the roads, particularly the longer distances. Last year he stepped up to the Half Marathon and clocked an impressive 59:25 on his debut at the distance in Lille before finishing a respectable sixth at the IAAF World Half Marathon Championships in Kavarna. In his only race of 2013 so far, he won the Barcelona Half Marathon in 60:04, winning by more than 80 seconds.

Kiprop, 26, won at the 2010 World Half Marathon Championships and crossed the line first in Roma-Ostia Half Marathon, equaling his personal best in an impressive 59:15.

His one and only Marathon to date was more modest, finishing fifth at the 2010 Prague Marathon in 2:09:09 but he seems likely be able to improve on that time. minutes.

Ethiopia’s Limenih Getachew could challenge the two better-known Kenyans and has a proved pedigree over 26.2 miles after finishing second at last year’s Cologne Marathon in 2:07:39.

Also included in the field are Ethiopia’s Chele Dechasa, a former runner-up in Amsterdam and Dubai with a best of 2:06:33; and the Kenyan pair of joseph Gitau, last year’s Fukuoka Marathon winner who has a best of 2:06:58, and Lawrence Kimaiyo, the winner in Kosice last year with a personal best of 2:07:01.

The fastest runner in the women’s race is Ukraine’s Kateryna Stetsenko, who set her 2:27:51 personal best when finishing second in Dublin in 2010.

Kenya’s Magdaline Mukunzi,the  winner in Dublin last year, is also expected to do well, while home hopes will be high for Germany’s Lisa Hahner, who made a promising Marathon debut in Frankfurt last year with her time of 2:31:28 and who is aiming for a time well under 2:30 after successful training camps in Spain and Kenya in recent months.