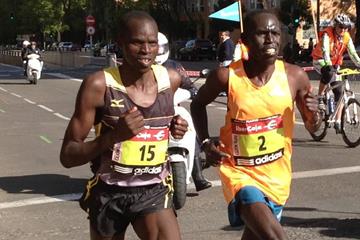 No fewer than 15,000 runners will gather in the Spanish capital to take part in the 38th Rock ’n’ Roll Madrid Marathon, an IAAF Silver Label Road Race, on Sunday (26).

The altitude of Madrid, which is 695 metres above sea level, and the undulating profile of its course has meant that the course record remains at a relatively modest 2:09:15, set last year by Kenya’s Ezekiel Kiptoo Chebii.

The 24-year-old Kenyan was making his marathon debut in Madrid after some outstanding half marathon performances topped by a 59:05 clocking in 2012.

However, after that promising first experience over the classic distance, on his second attempt Kiptoo had to settle for a 2:13:14 effort in Dubai back in January and so will want to show what he is really capable of when he defends his title.

Yared Asmeron, now 36, is the Eritrean record holder with 2:07:27 which he set back in 2011 and could also be a contender for the win. At least, he will be familiar with the roads around Madrid having trained in the Spanish capital regularly over the last decade, often with his better known compatriot and former world champion Zersenay Tadese.

However, he will be making his third marathon outing in less than five months after he clocked at 2:10:09 in Fukuoka last December and then 2:09:41 in Tokyo barely two months ago, and that may count against him.

Another 2:07 man on the start line on Sunday will be Jackson Kipkoech Kotut, who won the Barcelona Marathon in style five years ago in 2:07:30 although his last marathon was in Marrakech in January where he could not do better than 2:13:59.

As was the case last year, Sunday’s winner might well be a debutant in the guise of Uganda’s Thomas Ayeko.

He has had a creditable career on the track and at cross country, including 11th place in the 2013 IAAF World Championships 10,000m in 27:40.96, but the 23-year-old has focused mainly on the roads since then.

However, if you are looking for omens, then Ayeko can point to the fact that many of his best performances have come in Spain.

He was the 2011 IAAF World Cross Country Championships junior men’s silver medallist in Punta Umbria and his last competition came on the Spanish soil in the Basque country at the Azkoitia half marathon four weeks ago, when he ran a best of 1:01:12.

Morocco’s Malika Asahssah seems to be the favourite in a more modest women’s field on Sunday.

The 32-year-old is based in the Spanish city of Guadalajara, near Madrid, and seems to be in the form of her life as she clocked a 10km world-leading performance of 31:00 for in Laredo last month.

Asahssah holds a career best of 2:30:23 in her only serious attempt over the distance which took place three years ago in Hamburg. The Moroccan will have an eye on the course record of 2:32:04 set in 2009.

Another Spain-based athlete is Ethiopia’s Marta Tigabea and she could also challenge for the victory.

She will be in the company of her fellow Ethiopians Martha Markos Ayele (best of 2:30:24) and Abebech Tsegaye, who lowered her best performance to 2:33:49 when she finished second at the Sevilla Marathon in February.

The Kenyan challenge will be led by Monica Jepkoech, fresh from a fine win in the Azpeitia-Azkoitia Half Marathon in 1:10:30, and former world junior 3000m champion Beatrice Jepchumba, who will be making her debut over the distance.

For the sixth time in a row, an additional 10km race will take place alongside the Marathon with Spain’s 2010 European 1500m champion Arturo Casado and his compatriot Diana Martín, the reigning European 3000m steeplechase bronze medallist as the athletes to beat.

In addition, a half marathon event will be contested on Sunday morning, leading to an overall figure of over 31,000 runners on the day.

Unlike on previous occasions, this year there is a high calibre field due to the presence of the Kenyan pair of Emmanuel Bett and Edwin Rotich.

Weather forecasters are predicting a cloudy day with temperatures ranging between 12 and 14 degrees Celsius and a high likelihood of rain during the races.