It speaks volumes of the current standard of high jumping that world record attempts have become the norm. The Athletissima meeting in Lausanne, the seventh leg of the 2014 IAAF Diamond League, will no doubt play host to further attacks on the long-standing mark of 2.45m on Thursday (3).

Such is the quality of the event, it is almost seen as a disappointment now when a high jumper clears 'only' 2.40m. So it’s difficult to fathom that up until last June, no man had jumped 2.40m or higher outdoors for almost 13 years.

But in the past six months alone, there have been no fewer than 12 leaps over that mark, indoors and out.

After their epic clash at the IAAF Diamond League meeting in New York, where both men cleared 2.42m, Bondarenko and Barshim must be considered the favourites.

Blake back on track in the 200m

Double Olympic silver medallist Yohan Blake will be contesting his first 200m race in the IAAF Diamond League for almost two years. After missing most of 2013 through injury, the second-fastest sprinter of all time over the distance will be keen to return to sub-20-second territory.

Surprisingly, this will be just his fifth ever 200m race in the IAAF Diamond League but the Jamaican has fond memories of Lausanne as it is where he set his 100m best of 9.69 in 2012, breaking the meeting record in the process. Outside of major championships, no one has run faster than that – not even superstar Usain Bolt.

Blake will face Jamaican 100m champion Nickel Ashmeade, who won the 200m at the IAAF Diamond League meeting in Doha in May and is the fastest in the field this year at 19.95. Also in the field are the in-form trio of 2009 world silver medallist Alonso Edward of Panama, world indoor 60m bronze medallist Femi Ogunode and rising South African talent Wayde van Niekerk.

But perhaps the biggest sprint clash of the evening will be in the men’s 400m, where Olympic champion Kirani James will take on world champion LaShawn Merritt for the first time since their thrilling duel at the IAAF Diamond League meeting in Eugene.

The two sprinters went into that race with their career head-to-head record tied at five apiece. It proved to be the closest race of their rivalry too as both crossed the line in 43.97 with James getting the verdict on a photo finish.

Since then, Merritt has won in Rome, New York and Ostrava, and he will want to triumph again in Lausanne.

She may have recently achieved her 50th consecutive shot put victory, but the rest of the world appears to be catching up with world and Olympic champion Valerie Adams.

In her most recent appearance, at the IAAF Diamond League meeting in New York, Adams only moved into the lead in the fourth round and even then her winning margin was just 17 centimetres. Since opening her summer campaign in Doha, the farthest the New Zealander has managed was 20.20m.

But it all adds to the excitement in an event where the result, at least until recently, has always seemed a foregone conclusion.

Germany's world silver medallist Christina Schwanitz has been throwing similar distances to Adams this summer, while USA’s Michelle Carter – who pushed Adams all the way in New York – could also fancy her chances of an upset.

Pole vault world record-holder Renaud Lavillenie is yet to clear six metres this summer, but the Frenchman has a 16-meeting winning streak, the longest of his career to date.

Among his opponents in Lausanne will be the winners of the past two global championships, Greece's world indoor champion Konstantinos Filippidis and Germany's world champion Raphael Holzdeppe.

After jumping a wind-assisted 14.98m to win her national title last Friday, the 30-year-old will be aiming to produce the first 15-metre jump in the world since September 2010.

Dibaba out for redemption

For a competition of Athletissima’s stature, meeting records are hard to come by, but one such mark that could be under threat is the women’s 3000m.

No fewer than five of the entrants have this season run faster than the meeting record (8:34.58). But for world indoor champion Genzebe Dibaba, the victory will be more important than the time itself.

After a sensational indoor season, the Ethiopian lost her aura of invincibility at the IAAF Diamond League meeting in Doha. Despite setting a 3000m best of 8:26.21, she finished an uncharacteristic sixth.

Three of the women who beat her in that race – world silver medallist Mercy Cherono, world bronze medallist Almaz Ayana, and Kenya’s Viola Kibiwot – will be in Lausanne as Dibaba aims to get back on top.

Steeplechaser Jairus Birech has been one of the quiet revelations of the 2014 season. The 21-year-old Kenyan has improved with each race on the international circuit, both in terms of finishing position and time.

Birech won the IAAF Diamond League meetings in both Rome and Oslo, clocking a world-leading 8:02.37 in the latter. He will be up against his compatriots Brimin Kipruto and Paul Kipsiele Koech, two of the fastest men in history, but the unknown quantity could be Conseslus Kipruto.

The 19-year-old took the silver medal at the IAAF World Championships in Moscow last year while still a junior and won three IAAF Diamond League meetings in 2013. Kipruto hasn’t raced outdoors on the track this year, but if he is in similar form to last year, then he will be a big danger.

In the absence of the three reigning global 1500m champions, Kenya’s Silas Kiplagat appears the favourite to win the metric mile. Already this year, the 2011 world silver medallist has dipped below the 3:30 barrier and won at the IAAF Diamond League meeting in Rome.

If a challenge is going to come from anywhere, compatriot James Magut and Ethiopian record-holder Aman Wote appear to be the most likely contenders.

Eunice Sum’s last loss over 800m was more than a year ago, so it would take a brave person to bet against the world champion winning again in Lausanne. But the Kenyan will face Russia's Olympic bronze medallist Yekaterina Poistogova, who is the fastest in the field this year with 1:58.55.

Sprint sensation Tori Bowie set a 100m PB of 10.91 at the recent US Championships before withdrawing from the final as a precaution. Lausanne will be her first race since then, but she will be up against the only two women in the world to have run faster than her this year: Trinidad and Tobago’s Michelle-Lee Ahye and Jamaican champion Veronica Campbell-Brown.

The men’s 110m hurdles is one of the toughest events to predict this season.

On paper, Hansle Parchment would have been among the favourites, but after some difficulties with flights, the Olympic bronze medallist won't be in Lausanne. Instead, Andrew Riley – who beat Parchment at the recent Jamaican Championships – will take on world champion David Oliver, world silver medallist Ryan Wilson, world indoor silver medallist Pascal Martinot-Lagarde, European champion Sergey Shubenkov and world leader Orlando Ortega.

Two-time world silver medallist Javier Culson enters the 400m hurdles in Lausanne as the world leader, but Olympic silver medallist Michael Tinsley will be fired up after falling at the recent US Championships.

Olympic champion Felix Sanchez and world champion Jehue Gordon are also in the field and will aim to produce their first sub-49 performances of the year.

The men’s 100m in Lausanne is not part of the Diamond Race, but is nevertheless loaded with talent. World silver medallist Justin Gatlin will line up against former world champion Tyson Gay and US champion Mike Rodgers.

Nine men in the long jump field own bests farther than 8.40m; four of them have surpassed that mark this year, with Olympic champion Greg Rutherford being one of them.

He will be up against the top three from last year’s World Championships – Aleksandr Menkov, Ignisious Gaisah and Luis Rivera – as well as US champion Jeff Henderson, in-form Chinese record-holder Li Jinzhe and former European champion Christian Reif.

Since returning from a baby break, two-time Olympic champion Barbora Spotakova is yet to lose a javelin competition this year.

The world record-holder has picked up where she left off, but will need to continue throwing far if she is to hold off the likes of world leader Linda Stahl and world silver medallist Kim Mickle.

In the other long throwing event of the night, Polish discus thrower Piotr Malachowski will be hopeful of scoring valuable points in the Diamond Race in the absence of world champion Robert Harting. 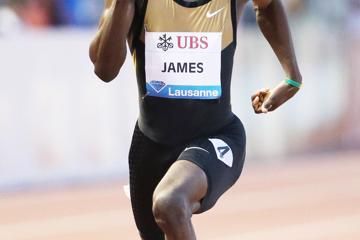 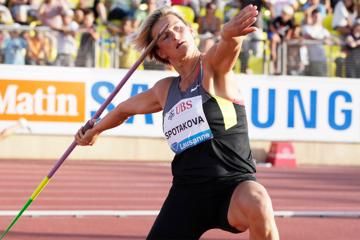 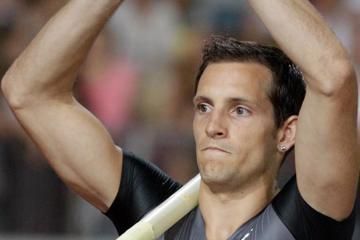