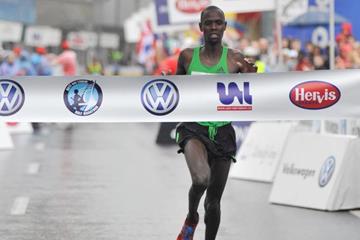 The Mattoni Ústí nad Labem Half Marathon will have two men who have gone under one hour for the distance, the Kenyan pair of Philemon Limo and Daniel Chebii, on the start line for the IAAF Silver Label Road Race on Sunday (15).

Limo is the 2011 champion who ran the first Half-marathon below one hour in Czech Republic when he finished the 2011 Hervis Prague Half Marathon in 59:30. He set the current course record of 1:00:58 when he won the inaugural edition of the race two years ago.

However, Chebii won the Mattoni Ceske Budejovice Half Marathon last year in 59:49 and is in peak form following his victory in the O2 Prague Grand Prix on Saturday, when he ran 27:35 and just missed Limo's race record by one second.

They should face stiff competition from their compatriot Julius Lomerinyang, who will be looking to improve his best of 1:00:31; there is also the Ethiopian pair of Lema Feysa and Tamirat Tola.

Other contenders for the podium include Kenya’s Nicolas Bor Bethwel Kiprono and Silas Ngetich, as well as Japan’s Keiji Akutsu and Taiga Ito, and Uganda’s Daniel Chepyegon.

The Czech men are led by Jan Kreisinger and Jiri Homolac, who are both preparing for the Frankfurt Marathon next month.

The women's field also looks to be very competitive with Kenya’s Josephine Chepkoech, who won the O2 Prague Grand Prix in 32:00, possibly the favourite.

She will face several strong challengers including her compatriot Caroline Chepkwony, who has the fastest personal best in the field with a 1:08:36 run in Berlin last year.

The other potential contenders include Ethiopia’s defending champion Betelhem Moges, a 1:10:38 performer at her best, and Russia’s Natalya Popkova, who is making her debut at the distance.

The Czech women will be led by the veterans Petra Kaminkova and Ivana Sekyrova.