Course records under threat in Lisbon

In the shorter event, Eritrea’s Zersenay Tadese returns to the city where in 2010 he broke the world record with 58:23. The course for this weekend’s race is different to the one Tadese previously raced on, but organisers are hopeful of the one-hour barrier being broken.

In the marathon, the course has been adjusted to make it flatter and nearer to the Tagus River. The conditions appear favourable too, with temperatures predicted to be between 20-22⁰C.

In the hope of seeing the 2:09:46 course record fall in the second edition of the race, organisers have provided three pace-makers to lead a field which contains seven men with sub-2:10 PBs.

With a best of 2:06:07, Kenya’s Philip Kimutai is the fastest in the field, but in his eight-year career, the 31-year-old is yet to win a race on the roads. He has numerous podium finishes under his belt, though, including a third-place finish in Vienna earlier this year.

Fellow Kenyan Lawrence Kimaiyo is also in form, having finished second in both Mumbai and Madrid this year. His personal best of 2:07:01 was set when winning in Kosice two years ago.

Samuel Ndungu enters the race as an unknown quantity, not having competed so far this year. But all of his marathons to date have been faster than 2:10, including his PB of 2:07:04, set on his debut when winning the Lake Biwa Marathon in 2012.

Robert Kwambai is another consistent sub-2:10 performer. He won in Padua in 2012 and in Linz last year, then set a PB of 2:08:48 when finishing fourth in Paris this year.

Taking on the quartet of top Kenyans, Ethiopia’s Dereje Debele could be the dark horse. He finished third in Xiamen this year in 2:09:35, but set his best of 2:07:48 when winning in Dusseldorf last year.

Ukraine’s Oleksandr Sitkovskyy finished just two places behind Kimutai in Vienna earlier this year. The 36-year-old set his PB of 2:09:14 last year and finished 12th in the 2012 Olympic marathon.

Zimbabwe’s Cuthbert Nyasango fared even better at the Olympics, finishing seventh. He has already raced in Lisbon this year, finishing 11th in the half marathon in March. Two months later he set a national marathon record of 2:09:52 in Prague.

The women’s field is led by Kenya’s Agnes Kiprop, the 2012 Prague Marathon winner who has a PB of 2:23:54. This will be her third marathon of the year, having finished sixth in Nagoya and third in Ottawa.

Compatriot Visiline Jepkesho will be contesting her second marathon, having made a winning debut in Milan earlier this year in 2:28:40.

The two Kenyans will be up against a talented pair of Ethiopians. Azalech Masresha is the faster of the two with her PB of 2:25:34. Aberu Mekuria is yet to break 2:33 this year, but she has a PB of 2:26:07 and has previously won in Eindhoven, Cologne and Hengshui.

Italy’s Emma Quaglia may be the fifth-fastest woman on the start-list, but the former steeplechase specialist finished sixth in the marathon at last year’s IAAF World Championships, so cannot be discounted.

Five-time world half marathon champion Zersenay Tadese will line up for his specialist distance in a bid to make a serious attack on the course record of 1:00:19.

That mark was set last year by Wilson Kiprop, the Kenyan athlete who in 2010 ended Tadese’s reign as world half marathon champion. Kiprop will not be in this year’s race, but Tadese hopes to record his 11th sub-60-minute clocking against a strong field.

Stephen Kibet leads the opposition. His best of 58:54 makes him the seventh-fastest man in history and his confidence will be high after finishing more than a minute ahead of Tadese at the Luanda Half Marathon last month.

Alex Oloitiptip Korio, who also beat Tadese in Luanda, will be in Lisbon, looking to improve on his PB of 59:58 set earlier this year. Ethiopia’s Mosinet Geremew has also dipped below 60 minutes this year, setting a PB of 59:54 in Prague.

Aside from Tadese, Eritrea will be well represented in the form of marathon national record-holder Yared Asmeron, world cross-country bronze medallist Teklemariam Medhin and 20-year-old Goitom Kifle, who finished second in this race last year.

European marathon champion Daniele Meucci is also in good form. The Italian has a PB of 1:01:06, set last year in New York.

Ethiopia’s 2011 world 10,000m champion Ibrahim Jeilan made his half-marathon debut in this race last year, finishing 11th in 1:04:37. He took another chunk off that time earlier this year, clocking 1:01:47, and will want to revise his best again.

The in-form athlete in the women’s field is Kenya’s Correti Jepkoech, who last month won in Usti Nad Labem in difficult conditions with a PB of 1:09:35. One week prior she clocked 31:05 over 10km to win in Prague.

She will be up against a pair of strong Ethiopians: 23-year-old Afera Godfay, who clocked a PB of 1:09:52 in Prague this year, and world 10,000m finalist Ababel Yeshaneh.

The local crowds will be focused on Portugal’s European indoor 3000m champion Sara Moreira. The 28-year-old has a PB of 1:10:08 and is currently preparing for her marathon debut in New York next month. 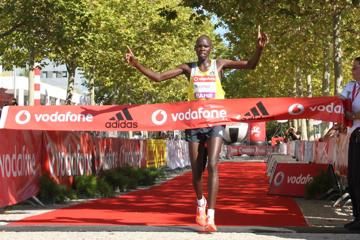 Kiprop sets course record at Half Marathon of... 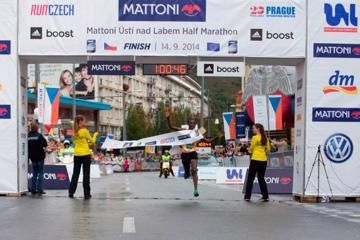 Takele and Jepkoech conquer the elements to w...