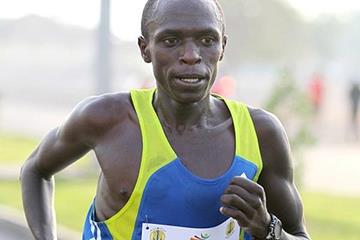 The elite field of the Dbam O Zdrowie Lodz Marathon this Sunday (20) includes only one previous winner of the IAAF Silver Label Road Race, but is nonetheless the deepest ever in the history of the event.

No fewer than nine athletes with sub-2:10 PBs have entered the race. The start list is led by the Kenyan duo of Albert Matebor with a career best of 2:05:25 and Sylvester Teimet, who has a 2:06:49 to his name.

This 11th edition of the race will be the first time that a Polish marathon has been granted IAAF Silver Label Road Race status. Another first is the race setup, with the finish taking place at the Atlas Arena indoor stadium. The race is also set for a participation record, with more than 1600 participants already entered.

With a fast course and mild weather forecasted for the weekend, the men's race record of 2:10:02 set by Belachew Ameta in 2013 looks destined to be broken.

The 34-year-old Matebor ran his fastest ever marathon in 2011 to take third place in Frankfurt. He has run faster than 2:10 five times in his career, most recently with 2:08:17 in October 2013, also in Frankfurt. The race in Lodz will be his second marathon of the year, after taking eighth place in Xiamen in January. Even though he has only won one marathon in his career (in Verona in 2011), the Kenyan's consistency must make him one of the favourites.

Teimet is a man somewhat more used to winning. His career record includes wins in Gongju, Seoul and Shanghai, all with sub-2:10 performances. It was in the second of these races that he set his still-standing PB of 2:06:49. The form of the 30-year-old is something of a mystery, though, as this will be his first marathon since 2013.

Another top name in the field is Teferi Kebede. The Ethiopian’s best season came in 2012, when he had two performances in the 2:07 range to place third at the Tiberias marathon and fifth in Paris, and was also the runner-up in Shanghai. He returned to the Chinese city to take third place the following year with another sub-2:10. But the race in Lodz will be his first marathon in more than a year.

John Kiprotich is another Kenyan among the favourites of the race. His best performances so far have been 2:07:08 for seventh place in Amsterdam in 2011, a win in Vienna the same year with 2:08:29 and a third place in the Austrian capital the following year with 2:07:44. The 26-year-old is another one with no marathon results since 2013, but he clocked 1:00:13 to finish fifth at the Roma-Ostia Half Marathon last month and thus appears to be a man in form to challenge for the win.

The one African runner in the field who has previously competed in Lodz is Kenya's Stephen Kibiwot, runner-up two years ago in 2:10:04. Kibiwot has also broken the 2:08 mark in taking second place in Prague six years ago, and he came close to repeating this feat in Dubai in 2012. His career also includes a fourth-place finish at the 2008 IAAF World Half Marathon Championships and major wins in Paris and Lille in that event.

The only previous winner of the race set to make a bid for a repeat victory is Yared Shegumo. The 32-year-old Pole has only been competing in marathons since 2012, but has already compiled a formidable competitive record. In addition to winning last year’s race with 2:10:41, he was also the victor in Warsaw in 2013 with a PB of 2:10:34 and the silver medallist at last year's European Championships.

The athlete with the fastest lifetime performance in the women's field is also an African. Makda Harun of Ethiopia ran her PB of 2:26:46 for third place in Paris in 2012. Her other results include a win in Venice in 2010 and a total of eight sub-2:30 performances, including two last year, in Houston and Ottawa.

The top Kenyan in the women’s field, Peninah Arusei, has a better record at half the distance, having earned the bronze medal at the 2010 IAAF World Half Marathon Championships. She was also an excellent track runner who made the Kenyan Olympic team at 10,000m in 2008.

She does, however, have a marathon best of 2:27:17 from Vienna in 2011, a race in which she finished third. She recently finished fourth at the Roma-Ostia Half Marathon with her fastest performance in three years, and thus looks like a serious contender for top honours in Lodz.

The strongest threat to the African dominance in the race should come from Olena Burkovska. The Ukrainian's record includes wins in Hannover two years ago (with a PB of 2:27:07) and Kosice in 2009. She ran faster than 2:30 as recently as last month, when she finished ninth in Nagoya.

Lemlem Bercha of Ethiopia is another sub-2:30 athlete in the field. A prolific racer, with five marathons run last year, she has been the winner in Barcelona and top-three finisher in other marathons including Kosice and Florence.

The women's race in Lodz also serves as the Polish Championships, with Monika Stefanowicz the top contender for gold. The 34-year-old's best of 2:30:12 dates back to 2006, but her recent PB of 1:12:14 in the half marathon signals that may be ripe for a revision.