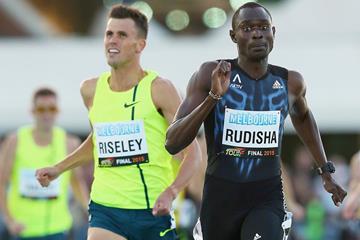 David Rudisha’s Olympic gold medal in the 800m four years ago in London could scarcely have been more impressive, leading every step of the way to a world record of 1:40.91.

It was a bravura performance which elicited lavish praise from two of the greatest middle-distance runners in history, Steve Ovett, as a television commentator, and Sebastian Coe, running the whole show as chairman of the organising committee.

Rudisha is embarking on another Olympic campaign and, once again, he has chosen the IAAF World Challenge meeting in Melbourne as the launch-pad. The Kenyan star has made the Melbourne meeting the regular benchmark of his early-season fitness, kicking off his season here in five of the past seven years.

An Olympic gold medal in world record time puts Rudisha in rare enough company, but should he win again in Rio this year he will join an even more exclusive club. No man has won consecutive Olympic 800m titles since the Flying Kiwi Peter Snell in 1960 and 1964. Only two others – Douglas Lowe (1924-28) and Mal Whitfield (1948-52) – have ever done it.

Rudisha’s appearance in Melbourne, where he will face a strong local challenge from the emerging Luke Matthews, Alex Rowe and Joshua Ralph, is one of the highlights of the opening leg of the 2016 IAAF World Challenge series.

Top-class distance running is in keeping with Melbourne’s reputation for distance running. No one has ever nominated it as ‘shot put city’, but that could change if the men’s shot put lives up to expectations.

Tom Walsh set the first of four Oceania records in 2015 when winning last year and this time faces the challenge of Damien Birkinhead, who is already out to 21.21m and threw 20.68m in winning his state championship last weekend.

A look back at last year

Melbourne will mark the opening of the seventh edition of the IAAF World Challenge, with the series continuing through every IAAF area to its conclusion in Rieti on 11 September.

Tom Walsh headlined the Melbourne meeting with a 21.37m Oceania record in the shot put and continued on to fourth place in Beijing.

Kingston saw Jasmin Stowers win the 100m hurdles in 12.39 and Elaine Thompson emerge with a 10.97 victory in the 100m. Stowers would miss Beijing, after finishing fifth at the US Championships, but Thompson went on to take a silver medal in the 200m. Dafne Schippers, the world 200m champion, lit up the Fanny Blankers Koen Games in Hengelo with a Dutch record of 10.94 in the 100m.

Others to put down pre-Beijing markers in the IAAF World Challenge were Almaz Ayana with an 8:22.22 win in the women’s 3000m in Rabat, the fastest ever run on African soil, and Bosnia and Herzegovina’s Amel Tuka with a then national 800m record of 1:43.84 in Madrid.

On the negative side, you would not have given much for David Rudisha’s chances of regaining his world 800m title when he failed to finish in Ostrava in June. Nor did Usain Bolt look too impressive in taking the 200m there in 20.13. Sure it was cold and rainy in Ostrava on that late-May evening, but the prospects for these two great champions seemed equally gloomy.

Of course, we all know what happened in the Bird’s Nest Stadium just three months later.

More excitement in store in Melbourne

The main players in the 800 metres remain coy about their ambitions. At a media call on Thursday, Rudisha suggested a 1:44-1:45 might be all that could be expected first up. His form has yet to be tested since returning to training last November.

Matthews has a few more runs on the board (in 2016, at least), having slashed his personal bests in the 800m, 1500m and mile already. He, though, has been talking about getting as close to the world record holder as possible.

Rowe has raced only twice, a so-so performance over 800m in Adelaide two weeks ago and a 400m heat at his state titles last weekend.

All following different paths, then, but if their performance trajectories intersect up the final straight on Saturday we could be in for exciting times.

The women’s 400m looks one of the stronger events with Jamaicans Christine Day (PB of 50.14 at the World Championships) and Kaliese Spencer up against the form local runner Morgan Mitchell (51.81 last weekend) and world semi-finalist Anneliese Rubie (51.69 last year).

In the men’s 1500m, Ryan Gregson has been in excellent form, running 3:36.74 in Hobart last month. He will clash with Commonwealth champion James Magut of Kenya.

On the field, world finalist Eleanor Patterson is starting to hit form in the women’s high jump, Alana Boyd, who has already set an Oceania record of 4.77m in the pole vault, will meet New Zealand teen Eliza McCartney (4.71m this year), and 2009 world champion Dani Samuels is up against Britain’s Jade Lally who set a personal best of 65.10m in beating the Australian in Sydney last weekend.