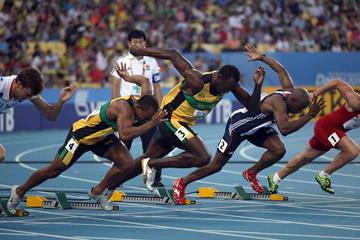 He is not the defending champion, but it seems the Moscow 2013 men’s 100m gold medal is Usain Bolt’s to lose.

Two years ago, Bolt’s false-start disqualification was the biggest shock of the 2011 IAAF World Championships in Daegu. Given recent developments, however, a loss in Moscow would be an even bigger surprise.

Not the biggest of the year perhaps – Tyson Gay and Asafa Powell may already have provided that. And their absence from Moscow, along with the injury to 2011 gold medallist Yohan Blake, clears most of the potential obstacles from Bolt’s path.

Daegu is the one blot on Bolt’s copybook since he broke through to win the 100m in a World record time at the 2008 Olympic Games. He duplicated that achievement at the World Championships in Berlin a year later, setting the current World record of 9.58.

Blake won in Daegu after Bolt’s untimely exit, and then loomed as an Olympic spoiler when he defeated Bolt in both sprints at the Jamaican Olympic trials.

Come the Games themselves, however, Bolt was back to his unbeatable best. He won in 9.63, the second-fastest time ever, and finished more than a metre clear of Blake’s 9.75.

Despite patchy early 2013 form, Bolt is the man to beat in Moscow.

The emphatic reversal of his pre-London losses to Blake suggests not too much can be read into his unconvincing early-season form, which included a loss to US sprinter Justin Gatlin at the IAAF Diamond League meeting in Rome, and recent history suggests Bolt will be at his best when it matters.

As if on cue, Bolt won at the Diamond League meeting in London in 9.85, becoming the fastest man on the Moscow entry list. Not that he will be complacent. His start in London was ‘horrifying’ in his words; only in the second half of the race did he look like the Bolt of Beijing, Berlin and London 2012 vintage.

Gatlin, the 2012 Olympic Games bronze medallist, is the most likely source of an upset, if there is to be one. He had IAAF Diamond League victories in Doha and Eugene before taking Bolt’s measure, by centimetres, in Rome with the pair clocking 9.94 to 9.95 respectively. His big occasion record also makes him the most potent threat.

Mike Rodgers and Charles Silmon will be the other two US individual representatives. Rodgers has a chance at a minor medal while Silmon, the US collegiate (NCAA) champion, faces the challenge of maintaining form from late March – he ran a windy 9.94 at the Texas Relays more than four months ago – through to mid-August.

Among the other Caribbean talents who will be on display is Bolt’s Jamaican team-mates Kemar Bailey-Cole, who has run 9.98 this season, and Nesta Carter, who clocked 9.87 in the rarefied air of Madrid but who was well behind Bolt in London.

Despite the absence of 2003 World champion Kim Collins, St Kitts and Nevis still packs a punch with Antoine Adams and Jason Rodgers, who have both recorded 10.01 this year.

Jimmy Vicaut and James Dasaolu represent the vanguard of the European push back into world sprinting.

Vicaut, a finalist in Daegu at the age of 19, improved to 9.95 in winning the French title from Daegu fourth-place finisher Christophe Lemaitre. Dasaolu ran 9.91 in the semi-finals of the UK championships, but missed the final after cramping and was also a withdrawal from the London meeting last month.

Japan’s 17-year-old prodigy Yoshihide Kiryu has run 10.01 this season, though he might be one for the future more than Moscow. China’s Asian Games champion Su Bingtian, with a best of 10.06, has openly stated his ambition is to go sub-10 in Moscow and with team-mate Zhang Peimeng, a 10.04 sprinter at his best, giving China a strong and unusual double-edged challenge.

Given the way the top end of the field has fallen away, though, it’s hard to see the 100m in Moscow being anything other than Bolt’s to lose.