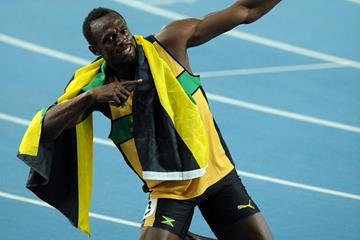 Is anyone in world sprinting contemplating beating Usain Bolt in the 200m?

If someone is, are they dreaming the impossible dream? Like Don Quixote, are they tilting at windmills?

It would seem so.

Bolt has always insisted the 200m is his favourite event, assuming a proprietorial air over the furlong, to use the old term for the distance’s imperial equivalent, the 220 yards, that the greater potential for disaster does not allow in the 100m.

It is the distance at which Bolt won a World junior title shortly before his 16th birthday, at which he made his breakthrough at senior level by leading Tyson Gay into the straight before taking the silver medal at the 2007 World Championships and at which he has won consecutive World and Olympic titles.

Since the IAAF Diamond League meeting in Paris on 6 July, Usain Bolt has also had the world-leading time to his name. Not that he needs a further statistic to bolster his credentials, but Bolt ran 19.73 and finished almost two metres clear of his countryman Warren Weir, who finished second in 19.92.

If anyone can derail Bolt’s ambitions, it could be Weir.

The former 110m hurdler, a semi-finalist in that event at the 2008 IAAF World Junior Championships, made rapid progress in 2012. With a modest personal best of 20.43 as the Olympic season began, he improved to 19.99 at the 2012 Jamaican Championships semi-finals before taking the vital third spot behind Yohan Blake and Bolt in the final.

He ran then 19.84 to take the bronze medal in the London 2012 Olympic Games final, this time behind Bolt and Blake as Jamaica executed a clean sweep of the medals.

Weir has continued to develop in 2013, reducing his 100m best to 10.02 in Kingston in early June before closing the month with a personal best of 19.74 to win the 200m at the National Championships.

Before losing to Bolt in Paris, he had notched up wins on the IAAF Diamond League circuit in Shanghai and New York, and he completed his racing preparation with a win in London in 19.89.

Bolt and Weir’s team-mates in Moscow will be Nickel Ashmeade, who won at the IAAF Diamond League meeting in Eugene, and the new find Jason Livermore.

The US charge will now be led by the relatively inexperienced pair of Isiah Young, a semi-finalist in London last summer, and Curtis Mitchell, who will be going to his first senior major championship.

If they need to hear the voice of experience, backing them up will be Wallace Spearmon, at 19.65 the seventh-fastest ever and a three-time World Championships medallist. He was fourth in London last year, but has not as yet approached that form in 2013.

Dutch sprinter Churandy Martina is another who could be in the medal hunt. The 2012 European champion won in Lausanne and is one of the most consistent performers on the international circuit.

France’s Christophe Lemaitre may fancy this distance ahead of the 100m and Norway’s Jaysuma Saidy Ndure is another to consider.

South Africa’s Anaso Jobodwana was a finalist in London last year. Just turned 21, he won the sprint double (10.10/20.00w) at the World University Games in Kazan recently. He has a legal best of 20.13, run this year.

As in the 100m, the form points very decisively Bolt-wards but, after him, the 200m is an open race.