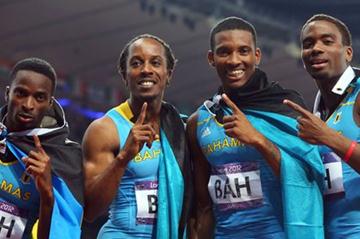 Last summer’s Olympic Games witnessed one of the all-time surprises in this event as the Bahamas (population 347,000) defeated the behemoth of this event, the USA (population 313 million), to win the gold medal.

It was an extremely rare defeat for the USA in an event they’ve come to regard almost as their own and the re-match between the two nations in Moscow is eagerly anticipated.

At the Penn Relays in April, the USA recorded a season’s best time of 3:00.91 to indicate they are in the mood to land a fifth successive World Championships gold medal and 11th in the history of the championships.

Leading the USA team is LaShawn Merritt, the world’s second-fastest 400m man in the world this year having run 44.09, and he is supported by the likes of two-time US 400m champion Tony McQuay (44.72), David Verburg (44.75) and Arman Hall (44.82). They appear in good shape to avenge their shock Olympic defeat 12 months ago.

By contrast, the Olympic champions boast only one sub-45 second performer in the 400m this year in Ramon Miller (44.93), but with the vastly experienced Chris Brown and the likes of Michael Mathieu to draw upon, and capable of raising their game when the occasion demands, so the ‘Golden Knights’ won’t go down without a fight.

The strength in depth of Caribbean sprinting is further demonstrated by the quality of Trinidad and Tobago and Jamaica, who will also both expect to feature in the final.

Trinidad, the 2012 Olympic bronze medallists, have recorded 3:02.19 this season and have talent such as individual Olympic 400m bronze medallist Lalonde Gordon and world No.2 400m hurdler Jehue Gordon to call upon.

Jamaica, who boast a rich tradition in this event dating back more than 60 years, currently stand second on the 2013 world List with a 3:01.15 time to their credit and with national 400m champion Javere Bell (45.08) leading their team, they are not without medal chances.

Russia, Belgium and Great Britain will lead the European charge.

Russia struck gold at last month’s World University Games. Backed by the home crowd, and with a solid contingent of one-lap runners, they could also be competitive.

Belgium, bolstered by the talented Borlee twins – Jonathan and Kevin, the 2011 World bronze medallist – now have a third Borlee in the relay squad after younger brother Dylan posted a personal best 400m time of 45.80 this season.

They finished fifth at the 2011 World Championships and one place lower at the 2012 Olympics Games, and so will also have ambitions of being involved in the battle for the medals again, although they may have to depend on others performing below-par or having problems with the baton if they are to climb the podium.

Great Britain, fourth on home soil at the Olympic Games and 2013 European Team Championship winners, should also be competitive.