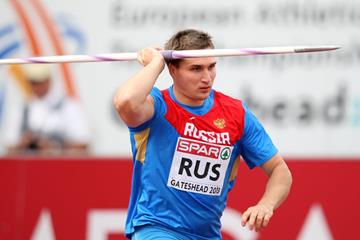 The medal prospects in the men’s Javelin seem to be much more open than in recent years ahead of this year’s major championship.

However, based on recent form the top three names from the 2013 world list are also the biggest favourites for the medals.

Russia’s Dmitri Tarabin is the world leader with his 88.84m personal best from the Russian Championships, but Czech Republic’s Vitezslav Vesely has been the most consistent thrower this season.

The 30-year-old won at the European Athletics Championships last year in Helsinki, but fell short of an Olympic medal with a fourth-place finish in London. He is second in the world this year with 87.68m from Monaco in July and he has also thrown 87.58m, 86.94m and 86.67m during his 2013 campaign.

Tarabin, who is the husband of 2011 World champion Mariya Abakumova, has been extremely consistent as well.

The Moldova-born athlete has finished in the top three in all of his eight meets of the season and has won at the European Team Championships in Gateshead and World University Games on home soil in Kazan, accompanied with one second place and two third place finishes from IAAF Diamond League meetings.

Finland’s Tero Pitkamaki won the 2007 World title and an Olympic bronze in 2008, but has not won a medal on the world stage since.

However, the 30-year-old finally found good form late in 2012 after a fifth-place finish in London and continued well at the start of 2013 season reaching a 87.60m season’s best at the IAAF Diamond League meeting in Shanghai in May.

His season had a setback in June when an injury forced a minor operation, but he bounced back nicely to win the Finnish championships in late July with 85.70m, and last weekend (3) in Kuortane threw 86.13m proving that he is back to his early season form.

Norway’s 31-year-old Andreas Thorkildsen had a disappointing 2012 season with no medals to show for it, but he has some special motivation where the World Championships are concerned.

He is already the only athlete to win a medal at four successive World Championships: including a silver two years ago in Daegu when he finished behind Germany's Matthias De Zordo, who cannot defend his title due to injury. A fifth straight place on the podium would be another major achievement.

Thorkildsen, who has eight career throws over 90 metres, has not yet hit top form during this season but his 84.64m season’s best is indication that he is not very far from that level and always performs well at major championships.

Two previous major championship medallists will also be starting in Moscow as well: Japan’s 33-year-old Yukifumi Murakami won the bronze medal at Berlin 2009 and has set a 85.96m personal best this spring while cuba’s 32-year-old Guillermo Martínez, who has a silver from 2009 and a bronze from 2011, also has a good 85.59m season’s best to his name.

Trinidad and Tobago’s 20-year-old surprise London 2012 Olympic games gold medallist Keshorn Walcott started the season well, reaching 84.39m with his first throw of the year, which remains his best this year. Like Pitkamaki, he took a break mid-season to rehabilitate some minor injuries after struggling to break 80 metres and returned to action last week with a solid 82.24m in Kuortane.

Walcott hadn’t done much before London compared to the men who were going to be is rivals in the British capital, and so he can’t be left out of the calculations as his potential is clearly there.

Another Olympic medallist from London, Finn Antti Ruuskanen, is also entered. The 29-year-old London bronze medallist reached a 84.05m in July and with his 85.70m behind Pitkamaki in Kuortane is in the form which brought his medal last summer.

Ukraine’s 25-year-old Roman Avramenko has enjoyed his best season yet, and he was sixth in Daegu two years ago. He has competed a total of 12 times with results over 80 metres in every competition and has a season’s best 84.48m.

Turkish record-holder Fatih Avan was fifth in Daegu and he too is in good form with a season’s best of 84.58m and won at the Mediterranean Games in June.

It has been a while since Sweden had a serious contender in the javelin, but 23-year-old Kim Amb has to be considered as one after his recent IAAF Diamond League win in Lausanne. Amb has thrown an 84.33m personal best this season.