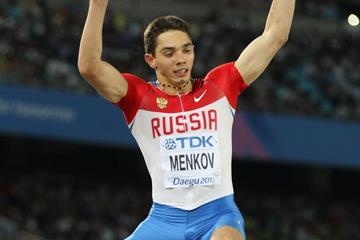 Aleksandr Menkov is one of Russia’s big hopes for a home success in Moscow. The European indoor champion has been a model of consistency this season, but he is far from the only gold-medal contender.

Menkov, still only 22 but sixth at the last IAAF World Championships in Daegu, was unbeaten in four competitions during the indoor season and improved his absolute best to 8.31m when winning the European indoor title in March.

He started the outdoor season where he left off under cover, jumping 8.31m at the IAAF Diamond League meeting in Shanghai for second place by three centimetres from local surprise Li Jinzhe.

However, back home in Kazan, the World University Games last month brought him down to earth and was a reminder that he is not the only likely winner.

In a thrilling contest which saw him improve to 8.42m, he was bested by the Mexican revelation Luis Rivera who added 16cm to his own national record set earlier in the season.

Rivera, who will be competing in his first World Championships and finished a lowly 32nd in qualifying at the London 2012 Olympic Games, seems to have a problem being consistent despite the occasional big jump.

In half of his 14 competitions this year, he has failed to get over 8.00m and his two competitions since Kazan will hardly inspire confidence, jumping only 8.00m for fourth place at the Diamond League meeting in London just over a week ago, a competition won by Menkov with 8.31m, and then 7.99m at a small meeting in Finland on Saturday.

In contrast to the prolific Rivera, Li has only jumped once since his eye-catching display in Shanghai, reaching 8.31m at the IAAF World Challenge meeting in Beijing three days later, so it will be interesting to see what sort of form he brings to Moscow.

Caceres improved his personal best by 10cm when he won the European under-23 title last month with 8.37m, coincidentally succeeding Menkov who had won that title in 2011.

It was his fifth consecutive win and his preceding two competitions were won with 8.22m and 8.20m, which means that he can be considered a medal contender as well.

Brazil’s Mauro Vinicius Da Silva knows what it’s like to stand on top of the podium at a global event, having won the 2012 World Indoor Championships gold medal. This year, he’s improved his best to 8.31m as well as taken the South American title and could cause a surprise, motivated by the thought that no Brazilian man has ever won at the World Championships.

Great Britain’s Olympic champion Greg Rutherford has struggled with a hamstring injury but was finally given the green light and included in the British team last week.

“Ultimately I am a big game performer. I enjoy these big occasions. I like the big stadiums, the crowds and the pressure, and after a decent training block I'm now going to go in there confident,” said Rutherford on Saturday.

By contrast, US long jumpers have only once failed to make the podium, in Seville 1999, but this year their trio don’t have the look of medal contenders.

Four-time World champion Dwight Phillips’ best for the year is only 7.89m while both Marquis Dendy and George Kitchens are likely to need to improve considerably on their bests to get into the top three.