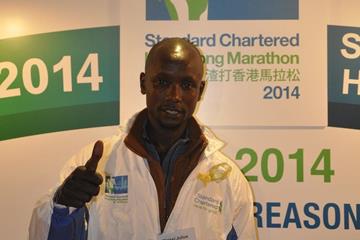 The coolest weather in almost 20 years this week means that runners in the Standard Chartered Hong Marathon on Sunday (16) could have their most temperate weather since the IAAF Silver Label Road Race was re-launched in 1997.

Given that the race had to be abandoned after three hours, due to a heatwave a few years ago, these are the best prospects ever of fast times for the elite runners, and an easier ride for the rest of the 70,000-plus competitors in the day’s various events at South East Asia’s biggest running festival.

The weather forecast will be a considerable boost to Ethiopia’s US-based Misiker Mekonnin Demissie, who is going for her third consecutive victory in the women’s race.

She set the women’s course record of 2.30.12 on one of the less humid race days in Hong Kong, two years ago, and was just 37 seconds shy of that time 12 months ago.

Mekonnin Demissie’s principal opponents this year will be Kenya’s Emily Chepkemoi Samoei, who won the 2012 Barcelona Marathon in what is still her personal best of 2.26.52, and Ethiopia’s Woynishet Girma, whose best is 2.27.51.

Maisei’s victory last year was a triumph for tenacity. He had finished second and fourth, both in photo-finishes, in the two previous years; and his experience of this far from easy course will work in his favour against the race debutants.

Barmasai made a huge impact in his first race outside Kenya when winning the 2011 Dubai Marathon in 2.07.18.

The victory earned him national team selection for that year’s IAAF World Championships, where he finished an impressive fifth, but he has been struggling with a knee injury since then and is looking to re-establish himself among the elite on Sunday.

Kipchumba, 38, is the fastest man in the field, with a 2.06.05 victory in Reims 18 months ago. He continues to run well, as evidenced by his win in the Xiamen Marathon last month, which is just up the mainland coast from here, in 2.08.03.

Clearly, Kipchumba has the ability to defy father time to a certain extent; less certain is his ability to recover from a fast race over the classic distance six weeks ago.

Balcha is the only Ethiopian contender, with a time 2.07.35 from when finishing third at the Tiberias Marahon two years ago, while the 38-year-old French international and Foreign Legionnaire Patrick Tambwe, who won that race in Israel in 2.07.30 to secure London 2012 Olympic Games selection, will also be on the Hong Kong start line.

Hong Kong heads up a burgeoning marathon circuit throughout China, with its overall purse of USD$300,000 in prize money, and a handsome USD$65,000 going to each of the two winners.