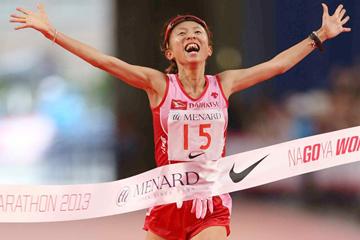 Kizaki, Konovalova and Kirwa set to clash in Nagoya

This will be the 35th edition of the women-only race, but just the fourth time that it has also been open to a mass field. This year, 20 elite runners – 13 of them with a sub-2:30 PB – have been invited.

Asian Games champion Eunice Kirwa is the fastest runner in the field with her 2:21:41 PB from the 2012 Amsterdam marathon. Ryoko Kizaki, who set her best of 2:23:34 when winning the 2013 Nagoya Marathon, finished second to Kirwa at the Asian Games.

But both will be up against defending champion Konovalova. Although 40, the Russian set her PB of 2:22:46 just 18 months ago at the 2013 Chicago Marathon.

Kizaki was disappointed to finish third in Nagoya last year, so Sunday’s race will be an opportunity for her to gain revenge on Konovalova.

Kizaki may be the best marathon runner in Japan right now. Besides her Asian Games silver medal, Kizaki was fourth at the 2013 IAAF World Championships and 16th at the 2012 Olympics.

In the unlikely event of all three of the main contenders faltering, then Ethiopia’s Aheza Kiros and Italy’s Anna Incerti could challenge.

Other contenders from overseas are Ukraine’s Olena Burkovska, Ethiopia’s Woynishet Girma and Brazil’s Adriana Aparecida Da Silva, all of whom have PBs faster than 2:30.

For Japanese athletes, this race is the final qualifying opportunity for the IAAF World Championships in Beijing.

In the previous qualifying races in Yokohama and Osaka, the fastest Japanese women were Tomomi Tanaka (2:26:57) and Risa Shigetomo (2:26:39), so if more than one Japanese woman runs faster than 2:26 on Sunday, there may be multiple runners from Nagoya making the marathon team for Beijing.

Kizaki is the favourite to make the team, but sub-2:26 runners Mai Ito and Eri Hayakawa could also run fast enough to qualify, as could Misato Horie.

Japanese fans are looking for a new marathon star, and Sairi Maeda and Reina Iwade could be the ones to fulfil that role.

Two other runners – Rei Ohara and Risa Takenaka – are making their marathon debut and they may contend for the top Japanese spot on Sunday.