Terfa and Hasen in Pole position ahead of Warsaw Marathon

The Orlen Warsaw Marathon may be only in its fourth running this year, but the event has already established itself as an important stop on the road racing circuit. An IAAF Silver Label Road Race since last year, the most recent edition was one of the deepest marathons of 2015, with six men under 2:08:30. This year’s race takes place on Sunday (24), and once again features a high-quality international field pitted against many of Poland’s top marathoners.

Negari Terfa of Ethiopia boasts the fastest PB in the men’s field with 2:07:32. He has not run a marathon in more than two years, but his last three outings at the distance all resulted in sub-2:08 performances. He won in Xiamen and Rome in 2013, and finished second in Houston the year after. His record also includes third place in Berlin in 2009, with another 2:07, as well as two more runner-up finishes in Xiamen. Terfa’s debut in Warsaw could be a continuation of that great series of races.

His compatriot Habtamu Assefa could be another top challenger. He has not completed a marathon since 2013, having dropped out of last year’s Rome Marathon, but his credentials include a best time of 2:08:28, set in Dubai in 2013, as well as podium finishes in Toronto and Florence.

One interesting entry is Moses Kibet of Uganda, who is making his marathon debut. The 25-year old has a strong record on all surfaces, with a 5000m best of 13:15.18, eighth place in the last World Cross Country Championships and a half marathon best of 61:37, set this year in Lisbon.

Poles prepare for race to Rio

This year’s Orlen Marathon also incorporates the men’s national championships, and most of the country’s top specialists will be in attendance.

Henryk Szost has arguably been Europe’s most consistent marathon runner in recent years. The national record holder at 2:07:39 from 2012, he has broken 2:10 five times. The top European finisher in the 2012 Olympic Games in ninth place, he also finished on the podium in two major Japanese races that same year – second in Otsu and third in Fukuoka. He has participated in all the previous editions of the Warsaw event: a non-finisher in 2013, third in 2014 with 2:08:55 and ninth last year in 2:10:11.

The other of Poland’s top runners, current European silver medallist Yared Shegumo, will also be in Warsaw. The Ethiopian-born runner withdrew from last weekend’s DOZ Lodz Marathon, citing a minor injury, but hopes to be ready this time.  An accomplished track runner in the past, Shegumo has been focusing on road races since 2012, and has broken 2:11 in each of the last three years. He was the winner of the Warsaw Marathon (an autumn race, distinct from the Orlen Warsaw Marathon) in 2013 and won in Lodz in 2014.

Both Szost and Shegumo have already achieved the Polish Olympic qualifying standard of 2:11:30, but need to confirm their competitiveness in Warsaw to book their tickets to Rio.

The Polish federation also gave an opportunity for other runners to qualify for the Olympic team by running under 2:12:30 in the national championships if fewer than three runners achieve the governing body’s qualifying standard. Among those vying for a spot will be Arkadiusz Gardzielewski (PB of 2:11:34 in 2012), Artur Kozlowski (2:10:58 in 2012) and Emil Dobrowolski (2:13:50 in 2015).

On the women’s side, Merima Hasen of Bahrain should be one of the top challengers. Still only 23, she has compiled an impressive series of performances, with a best of 2:23:06, set while placing third in Toronto in 2010, and two more races in the 2:23 range – first in Houston and second in Paris in 2013. She also boasts wins in Ottawa and Dusseldorf and podium finishes in Rotterdam, Xiamen, Mumbai and Shanghai.

Peninah Arusei , at 37, may be a veteran, but she has already confirmed she is in top shape this year with a 69:08 half marathon in Ostia. The Kenyan has a string of impressive half marathon performances, including bronze at the 2010 World Championships, a fifth place in the same competition in 2008 and a best of 67:48. She has also broken 31 minutes at 10,000m on the track and represented her country in the 2008 Olympic Games. Her fastest marathon, 2:27:17, came in her debut in Vienna in 2011, where she took third place, and she also placed fifth in Amsterdam later the same year with 2:28:38.

Another Kenyan, Winnie Jepkorir, has only two marathon races to her name, both in 2014 – third place in Hamburg with 2:27:57 and sixth in Frankfurt in 2:29:05. She has, however, broken her half marathon best by a full minute this year, and may be looking for an improvement over the 42.195km distance as well.

The next best among the Africans are the Ethiopians: Alem Fikre, with a best of 2:30:13 from 2013, and Kumeshi Sichala, whose only marathon was a 2:30:56 for second place in Mumbai last year.

Maryna Damantsevich of Belarus is a consistent runner, who set her PB in her last marathon outing in the Orlen Marathon a year ago, with 2:30:07 securing her fourth place.

The best among the Polish women in the race is Agnieszka Gortel-Maciuk, the runner-up in Koln in 2013 with 2:30:28. The 39-year old has already completed a marathon this year with seventh place in Houston in 2:33:19. 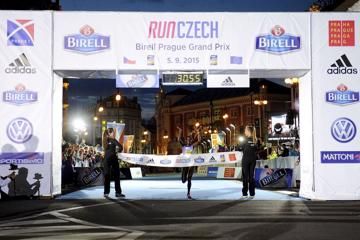 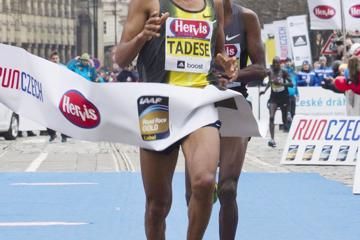 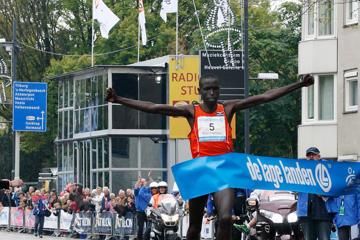 Kipchumba and Jepkoech top the bill at Madrid...