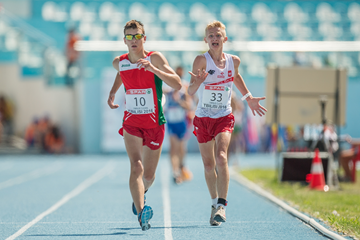 Guatemala has never won a medal at an IAAF championships, but Jose Eduardo Ortiz could end that spell in Nairobi.

Although he has relatively limited racing experience, Ortiz is the fastest U18 athlete in the world this year in the 10km race walk. He clocked a best of 40:58 on the roads to finish a close second in the U20 race at the Pan American Race Walking Cup in May.

But with this year’s World U18 Championships being held at altitude, the race may not go entirely to the formbook because difficult conditions can often lead to surprise results.

China will be represented by Zhang Yao, winner of the U20 race at the Mario Albisetti Memorial in Lugano, and Qian Haifeng, both of whom have recorded season’s bests well inside 42 minutes. They will aim to win China’s first gold medal in a boys’ race walking event at the IAAF World U18 Championships.

Meanwhile, Mikita Kaliada of Belarus and Lukasz Niedzialek of Poland will renew their rivalry. At last year’s European Youth Championships, Niedzialek built up a big lead in the boys’ 10,000m race walk before Kaliada essentially ran to gain the lead in the closing stages, only to be disqualified for loss of contact and leaving Niedzialek to rightfully claim the gold medal.

Kaliada gained some redemption at the European Cup in Podebrady in May, finishing one place and nine seconds ahead of Niedzialek to take the silver medal in a PB of 41:19, and he’ll be keen to do so again in Nairobi.

Salavat Ilkayev, competing as a neutral athlete, could also challenge for a medal.