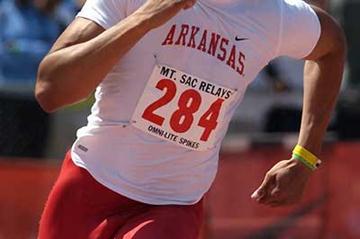 At the World Championships, there are several interesting names to watch in the 200m. Two names to keep in mind for the future are Wallace Spearmon and Usain Bolt.

Wallace Spearmon is a 20-year-old American, who burst onto the world stage by winning the US university championships with an impressive 19.91. At the US championships at Carson in June, the inexperienced Spearmon finished fourth in the 200m with 20.16. Although only the three fastest qualified for the team for the World Championships, Spearmon was later added to the team because Shawn Crawford did not want to run the 200m in Helsinki.

Spearmon runs with a long, elegant stride. Helsinki will be his first major championship. He has competed often this year, both indoors and outdoors. Nevertheless, running his PB and world season best time of 19.89 in London on July 22, Spearmon showed the world that his form is peaking right on time.

Usain Bolt is also running faster as the World Championships get closer. The 18-year-old from Jamaica also ran his best time this season in London. Spearmon won the race, but Bolt clocked 19.99. His PB is the World Junior record of 19.93 from last year.

Another promising name is Tyson Gay of the United States. At 22 years, he is only slightly older than Bolt and Spearmon. At the US University Championships, Gay’s time in the semi-final was absolutely world-class, 19.93. He ran again under 20 seconds in London in July with 19.99.

The youngsters are fast, but they all have fairly little experience in dealing with the pressures of a major championship final. One man who knows how to deal with those pressures is Justin Gatlin. The American took home the bronze medal at the Olympics last year. The first man in 20 years to win both the 100m and 200m at the US championships, Gatlin took a convincing win in late June with 20.04. His best time this season is 20.00.

Four men from the US will line up in the 200m, because John Capel is the defending champion. Capel’s best time this year is 20.47 from London in July.

A European challenger perhaps able to upset the American dominance could be Christian Malcolm of Great Britain. Malcolm won at the European Cup Super League in Florence with 20.15.

Another possible European surprise name is Tobias Unger who broke the long standing national record (20.23s from 1985) by Frank Emmelmann earlier this season in the German championships. Unger clocked two impressive personal bests, 20.20 NR over 200m and also a 10.16 winning time for 100m. The 2005 European Indoor champion finished seventh in the Olympic final of 2004 and took the bronze medal in the 2004 World Indoor championships.

A real question mark hangs over 100m specialist Ronald Pognon of France who rarely runs the 200m distance, but easily set a personal best of 20.34 in the recent national championships in his second choice event and is also entered to Helsinki World Championships for the 200m.