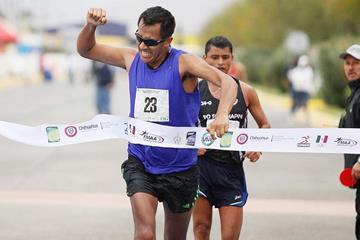 After scoring a historic sweep in 2015, the host country Mexico is ready to face the rest of the world as 165 athletes from 18 nations descend on Ciudad Juarez for the second stop of the IAAF Race Walking Challenge on Sunday (6).

Maria Guadalupe Gonzalez, Eder Sanchez and Jose Leyver Ojeda took the top honours in their respective events in 2015 in Chihuahua. They will be back on Sunday to defend their titles in front of their home crowd in Ciudad Juarez.

Sanchez produced marks within 1:22:00 on two occasions last year, half a minute faster than the Olympic standard set by his national federation. But he wants to confirm his position as the fastest Mexican over 20km to secure a spot on the team for Rio and the IAAF World Race Walking Team Championships Rome 2016.

“I want to secure my Olympic qualification,” he said. “I have started a new stage in my athletics career, injury-free. Injuries plagued me and kept me out of the world’s best for two-and-a-half years.”

The 28-year-old is expected to face a strong challenge from South Africa’s Lebogang Shange, who improved his national record by more than a minute to 1:20:04 to finish second at the opening leg of the IAAF Race Walking Challenge in Adelaide two weeks ago.

Canada’s Pan American Games silver medallist Inaki Gomez is also a top candidate for the podium. He completed four months training in Australia with a fourth place in Adelaide in 1:20:22, just four seconds off his personal best.

In the women’s race, Maria Guadalupe Gonzalez is hoping to get 2016 off to a good start as she did a year ago, when she won all races she entered, including the Pan American Cup in Chile and the Pan American Games in Toronto.

Runner-up to Gonzalez in Chihuahua and Toronto, Brazil’s Erica de Sena is also back in Mexico. De Sena improved the South American record to 1:29:37 and finished a solid sixth at the IAAF World Championships in Beijing. Those performances propelled her to third place overall in the overall 2015 IAAF Race Walking Challenge standings, becoming the first South American woman to secure a top-three finish in the challenge.

Ines Henriques showed last weekend she is ready to return the podium in the Mexican race after taking the Portuguese title in 1:30:51. Henriques has finished fourth in the past two years. Winner three times between 2011 and 2013, she has also stepped on the podium on three other occasions in Mexico since her debut in this event in 2008, including a bronze at the 2010 World Cup.

A podium finisher in Mexico since her debut there in 2013, Ana Cabecinha will miss this weekend’s race as she slipped on a staircase before the Portuguese Championships and injured her rib.

But Colombia’s Sandra Lorena Arenas is back to regain the victory she took in 2014. The 2012 world junior bronze medallist did not finish in 2015.

The 50km race will feature the two most successful men at that distance in the history of the Mexican race: defending champion Ojeda and Omar Zepeda, with three wins each.

Ojeda is set to revive his rivalry with compatriot Zepeda and Ecuador’s Andres Chocho, who finished six seconds behind him in Chihuahua last year before taking the Pan American Games title in Toronto.

The Mexican race walkers are aiming for 3:52:00, the time set by their federation to make the Olympic team. A 50km specialist, Chihuahua native Horacio Nava will opt for the 20km and will aim for a fast 50km time in Dudince, Slovakia, two weeks later.

After hosting a leg of the challenge in Chihuahua annually since 2007, the race moves to Ciudad Juarez, also in the state of Chihuahua, for the 2016 edition.

The races will be held over a two-kilometre loop course on Paseo Triunfo de la Republica. The 50km event will start at 7am local time, followed by the 10km junior races, the women’s 20km at 11:30am and the men’s 20km two hours later.

Prize money of $50,000 will be distributed among the top eight athletes in the 20km and 50km events.

After Ciudad Juarez, the 11-leg series will travel to Asia, South America, Africa and Europe over the next five months before its conclusion at the Olympic Games in Rio in August.