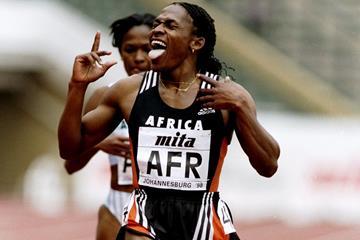 Mutola, 26, a product of the American collegiate system since first leaving her home town of Maputo eight years ago, thought she had broken the record in Lievin last year.

But the mark was not officially accepted because a television recording of her run showed that she had stepped inside the track during the race. "I was unlucky last year, but now I know I can break the record," Mutola said.

In the men's events, the ideal race would have been a clash between Komen and Gebrselassie.
But the two African distance rivals have not met on the same track since a fabulous clash over 5,000 metres in Zurich two years ago, so the best the meeting organisers can manage in Birmingham is to have the two men attack one of their rival's world record.

"When I race against Haile, I am racing and pacemaking," Komen says. "I would prefer it if he did some of the work."

Accordingly, Komen, the 5,000 metres outdoor world champion will have a crack at the 2,000 metres indoor world best of 4:52.86 seconds which Gebrselassie set on this same track a year ago.

Steven Downes for the IAAF