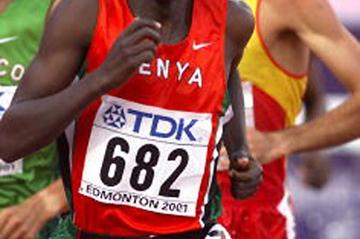 The 26th edition of the Florence Marathon has reached a great goal this year by breaking the record figure of 10,000 entries, as announced by the organisers of the popular Tuscan race scheduled for this Sunday 29 November.

The Florence Marathon is an IAAF Label Race.

The most prominent name in the men’s field will be Reuben Kosgei, 2000 Olympic and 2001 World champion in the men’s 3000m Steeplechase. After a distinguished career in that gruelling race over the barriers, Kosgei will make his first serious attempt over the 42 km distance since a test run in last April’s Vienna Marathon in which he dropped out at 25 km.

Kosgei will take on his experienced compatriots Paul Ngeny Kipkemboi, who set his PB of 2:12:50 when he won in Florence in 2007, and finished third here last year, and Ben Kipruto Chebet, who dipped under the 2:10 barrier to win this year’s Padua Marathon with 2:09:42.

Another sub-2:10 runner to line-up in Florence will be 23-year-old Ethiopian Girma Assefa who clocked 2:09:58 in Berlin last September. Twenty-six year-old Russian Valentin Orare, who ran his half-marathon PB of 1:01:33 in Philadelphia, will make his debut over the marathon distance.

The Italian challenge will be led by a trio of experienced runners led by Daniele Caimmi, Danilo Goffi and Denis Curzi.

37-year-old Caimmi will make his serious comeback over the distance after two years. Caimmi, fourth at the 2002 European Championships in Munich and sixth at the 2003 World Championships in Paris, paced his wife Rosaria Console in last September’s Berlin Marathon where she finished fourth in her lifetime best of 2:26:45. For Caimmi, a 2:08:59 performer in 2002 in Milan, it’s a return to Florence where he finished third in 2007.

Danilo Goffi, a former European Marathon silver medallist in 1998 behind Stefano Baldini in Budapest 1998 and a 2:08:33 in Rotterdam 1998, will pursue his goal to clock a good time and book a berth for next summer’s European Championships in Barcelona 2010.

The Italian interest in the women’s race will be focused on Italian marathon specialist Ivana Iozzia, two-time national marathon champion (2005 and 2007), who ran her PB of 2:34:32 in Padova last April and her half marathon PB of 1:12:15 in Garda Half Marathon last October.