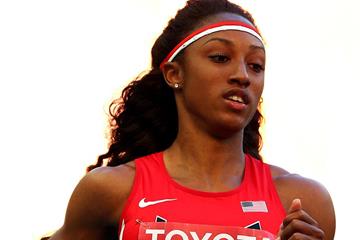 In a race which regularly serves up some of the Olympics' most dramatic moments, it would be remiss to not make prominent mention of the glittering cast list of stellar talent who have not made the start line for the Rio 2016 Olympic Games.

The past two Olympic champions – Australia’s Sally Pearson (injury) and the USA’s Dawn Harper Nelson (US trials disappointment), will not be competing in Brazil, while world champion Danielle Williams endured her own pain at the Jamaican Trials to miss out. But perhaps most disappointingly there will be no place in Rio for Keni Harrison who produced arguably the track and field performance of the summer in London last month by blasting to the 100m hurdles world record of 12.20 (subject to the usual ratification procedures).

With seven wins out of eight this year, Harrison has proved near invincible but her one bad race came at the US Olympic Trials when she finished sixth to miss out on the US team for Rio. Cruel.

Even in the absence of Harrison, the US team is still stocked with world-class talent. This season alone the US boast the seven quickest women in the world in this event and with the fastest three in the field for Rio it would be a surprise should the US not triumph.

The focus on Rollins

Leading the US challenge is Brianna Rollins, who starts favourite after blitzing to a 12.34 clocking when landing her national title in July. The 24-year-old, who took the world title in 2013, is pure class and with four top-two finishes on the IAAF Diamond League circuit this season will be the woman to beat inside the Olympic Stadium.

Alongside her on the US team is the impressive Nia Ali, who clocked a season’s best of 12.55 to place third at the Olympic Trials to book her ticket for Rio. Ali made a big breakthrough to win the world indoor 60m hurdles title two years ago. She then took time out and then after giving birth to a baby boy – Titus Maximus in May 2015 – only to bounce back and retain her crown in Portland earlier this year.

Completing the US trio is Kristi Castlin, who ran 12.50 for second at the Olympic Trials. The 28-year-old has also placed a handy third at IAAF Diamond League meetings in Birmingham and London this season but in her one previous major championship appearance, at the World Indoor Championships in 2012, she failed to advance beyond the heats.

Recently minted European champion Cindy Roleder appears the best of the rest. The 26-year-old German champion set a season’s best of 12.62 en route to her continental success in Amsterdam last month, and has the ability to rise to the occasion after winning world silver last year.

Look out too for Belarusian champion Alina Talay, who finished just 0.06 behind Roleder at last month’s European Championships to claim silver and last year banked a bronze at the IAAF World Championships Beijing 2015.

The 2013 world bronze medallist Tiffany Porter (12.70) has a strong championship pedigree, although the Briton is a little below her absolute best so for this season. Her younger sister, Cindy Ofili, with a season’s best of 12.66, could also feature.

Look out too for 35-year-old Swedish veteran and world indoor record-holder Susanna Kallur, who makes her first major global championships appearance for eight years following a raft of injury issues.